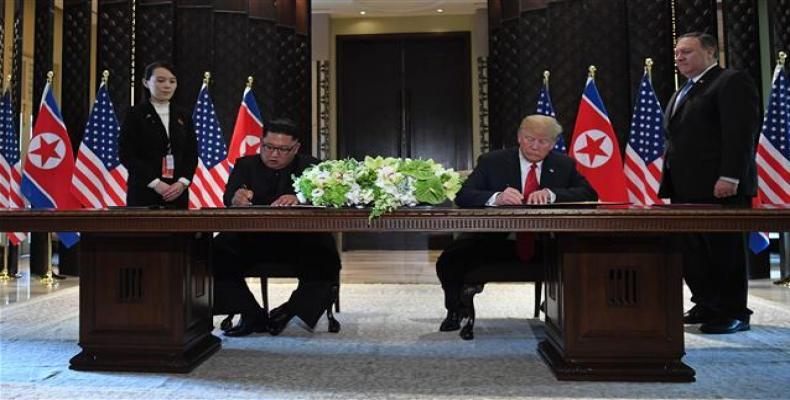 Washington, June 13 (RHC)-- The U.S. Congress and some of Donald Trump's advisors could sabotage the progress made towards establishing lasting peace on the Korean peninsula during the U.S. president's recent summit with North Korean leader Kim Jong-un, an American writer and retired professor says.

James Petras, who has written dozens of books on international issues, made the remarks in an interview with Press TV while commenting on the historic Trump-Kim meeting, the first ever encounter between a U.S. president and a North Korean leader.

Following the summit on Tuesday in Singapore, Trump and Kim signed a document described by the American leader as important and comprehensive.  The document says the U.S. and North Korea "commit to establish [sic] new... relations in accordance with the desire of the peoples of the two countries for peace and prosperity."

North Korea also reaffirmed its commitment to working "towards complete denuclearization of the Korean Peninsula," a broad wording that could mean phased denuclearization in return for a number of potential American commitments along the way.

Press TV asked Professor Petras about the significance of the Trump-Kim summit and whether it would help establishing peace on the Korean peninsula.  Petras said: "I think it's premature to make any definitive judgment because everything is tentative.  What we can say is the fact that the United States" government recognizes North Korea as a legitimate interlocutor that the U.S. did not demonize -- at least Trump did not demonize -- the North Korean president, and the admission that the U.S. military exercises on the frontier were provocative."

"I think one has to take all of these first steps as positive measures. But we also know Trump has broken the agreement with Tehran. We know that his team has endorsed the violation of the agreement with Libya," he added.  "We know that there's a Congress made up of both Republicans and Democrats who were very hostile to any overture toward North Korea.  So I think it's a very mixed situation.   On the one hand one step forward, but also the possibility that with the Congress and some of its own advisors, they could sabotage this conference, these negotiations and set it back," he noted.

"On the other hand we have the possibilities that some kind of reconciliation or at least agreement that would lessen the conflicts in Asia and indeed over a longer period of time reached some kind of peace agreement and the lifting of sanctions," the analyst concluded.