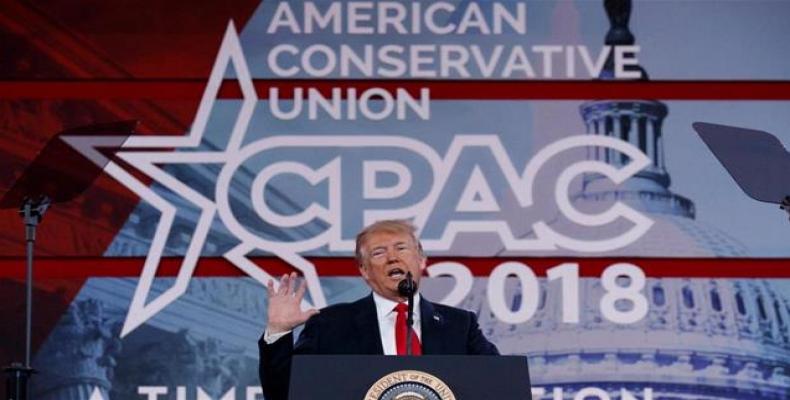 Washington, Feb 24 (RHC)-- In a gathering of prominent U.S. Conservatives, President Donald Trump has said an armed officer who did not stop the gunman that killed 17 people last week in a Florida high school massacre was either a "coward" or "didn't react properly under pressure."

During his speech at the Conservative Political Action Conference on Friday, Trump once again emphasized the arming of more teachers and school security guards as a solution to American school shootings.  An armed officer assigned to the Florida school where a gunman killed 17 people last week took cover outside the high school rather than enter the school building and address the killer.

Departing the White House for the Conservative Political Action Conference, Trump told reporters that "when it came time to get in there and do something," Florida deputy Scot Peterson "didn't have the courage or something happened."  Trump said: "He certainly did a poor job, there's no question about that."  The U.S. president repeated his criticism at the conference: "When we declare our schools gun free zones it just puts our students in far more danger," he said and repeated his calls to arm teachers with training or military experience.

Trump said the Stoneman Douglas high school had a big campus and would have to have "150 real guards."   He continued to repeat his call to "harden" schools as a deterrent for people who enter a school intending to harm students or teachers.

"This would be a major deterrent because these people are inherently cowards. If they thought, like if this guy thought that other people would be shooting bullets back at him, he would not have gone to that school.  He would not have gone there," he said.  Trump also stressed the importance of the Second Amendment and claimed Democrats want to “take away” the Second Amendment that reads, “the right of the People to keep and bear arms shall not be infringed.”

Trump also lashed out at his opponents and Democrats, deeming Democrats "really crazed."  Trump did not limit himself to Democrats and took a jab at Republicans he deems not cooperative enough with his administration.  Although he did not name Senator John McCain of Arizona, he lashed out at his vote against a health care repeal that many Republicans backed.