U.S. police received calls about school shooter being in crisis 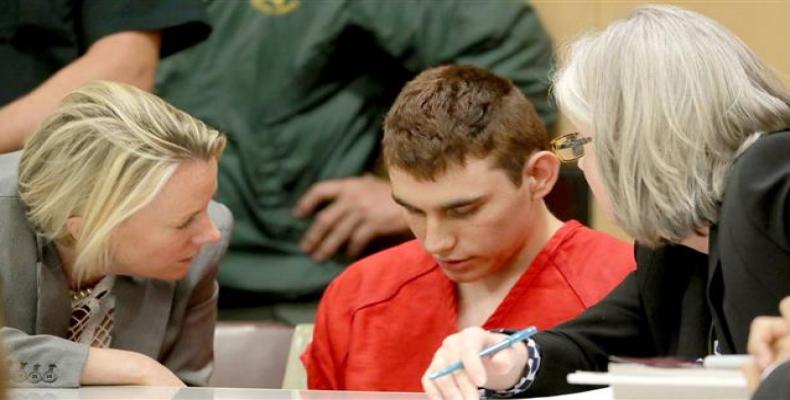 Miami, Feb 26 (RHC)-- Several weeks before last week’s mass shooting at a Florida high school, a woman close to the 19-year-old charged in the attack warned law enforcement authorities in a phone call about his escalating rage, violent outbursts and threats to kill others.

In a January call to police, an unknown woman who knew Cruz, warned authorities that she was concerned that Cruz might resort to slipping “into a school and just shooting the place up.”  According to a transcript of her call with the FBI, she said: “I know he’s going to explode.”
And the woman added: “If you go onto his Instagram pages, you’ll see all the guns.”

Only forty days later, Cruz is accused of shooting dead of 17 people at his former high school in Parkland, Florida on February 14.

Last week, the FBI acknowledged it received such a call, which it said was from a person close to Cruz.  Cruz himself also called police back in November after a fight at the house where he was living, according to police records released this week.

“I kind of got mad and I started punching walls and stuff,” he told the dispatcher during a 5½ minute call.  “The thing is I lost my mother a couple weeks ago, so like, I’m dealing with a bunch of [inaudible] right now.”

Rocxanne Deschamps, the woman who took in Cruz after the death of his mother, also expressed concern in a late November call to police that he was going to get a gun after an altercation with her adult son.  She told the police dispatcher that Cruz already had about eight guns that he kept at a friend’s house.

“Because that’s all he wants is his gun, and that’s all he cares about is his gun,” the woman said in a recording of the call released by police.  After the calls, police helped calm the situation and Cruz moved in with another family around that time.

In another phone call to police, an unidentified caller from Massachusetts warned that Cruz was collecting guns and knives and that “he could be a school shooter in the making.”

The FBI has admitted it failed to follow up on the information.  The agency and the Justice Department are investigating why the lead wasn’t followed up.