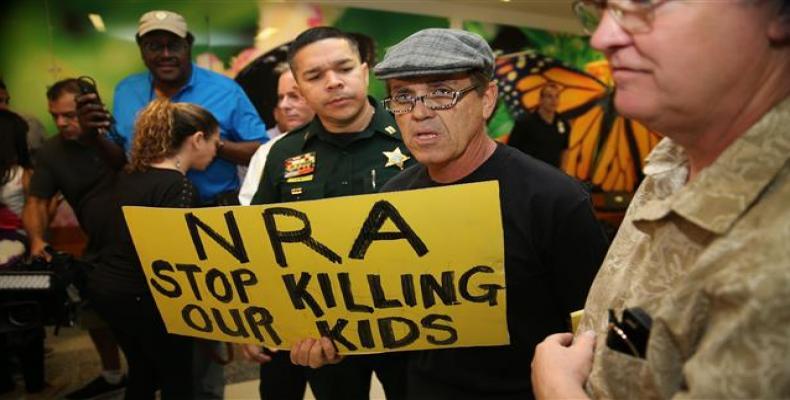 Ft. Lauderdale, Feb 19 (RHC)-- A student from a Florida high school where yet another mass shooting left 17 people dead has blasted U.S. President Donald Trump and many other lawmakers in the country for receiving money from the powerful lobby group National Rifle Association (NRA), which fervently opposes gun control across the nation.

"If the president wants to come up to me and tell me to my face that it was a terrible tragedy and how it should never have happened, and maintain telling us how nothing is going to be done about it, I'm going to happily ask him how much money he received from the National Rifle Association," said student Emma Gonzalez of Marjory Stohneman Douglas High School during her speech at a major gun control rally in Ft. Lauderdale over the weekend.

"Is that how much these people are worth to you, Trump?" she then asked as thousands of protesters at the rally started changing "shame on you" after she mentioned the NRA's donations to Trump.

Gonzalez further told the crowd that U.S. politicians should stop accepting political donations from the NRA.  The protesters carried anti-NRA signs and demanded changes to gun control laws in Fort Lauderdale, Florida, days after 17 people were shot and killed at the high school in the city of Parkland, some 25 miles away.

Thousands of students, parents, teachers and neighbors also chanted, "Vote them out!" as they called for gun control legislation, which has always been opposed and foiled by NRA-backed members of the US Congress.

Gonzalez then condemned lawmakers who "sit in their gilded House and Senate seats funded by the NRA" for saying nothing can be done to prevent shootings.  "They say that tougher gun laws do not decrease gun violence. We call 'B.S.' They say a good guy with a gun stops a bad guy with a gun. We call 'B.S.'"

Meanwhile, The Network for Public Education and the American Federation of Teachers called on students, teachers and administrators to organize sit-ins, walkouts and other acts of protest on April 20, the anniversary of the 1999 mass shooting at Columbine High School in Colorado.

The groups said the aim is to push lawmakers to enact gun control legislation.  American Federation of Teachers President Randi Weingarten said the answer to school violence is to keep guns away from people who should not have them.

A number of Democratic lawmakers have renewed their call for gun control legislation after the mass carnage. Survivors of the shooting have also joined the call, demanding Republican lawmakers take action following the bloody shooting.

The development came as Florida State Legislature is struggling with what to do in the aftermath of the carnage.

Some Republican lawmakers wanted to consider a bill to put trained, armed volunteers or school employees inside the state's public schools.  The state's Senate Judiciary Committee was due to take up the legislation (SB 1236), but committee chairman Senator Greg Steube announced late Friday that the measure would not be taken up after all.

Steube made his decision after several top senators said they were opposed to considering the bill, AP reported.  According to local press reports, the teen accused of shooting and killing 17 people in a Florida high school is said to have left a suburban Palm Beach County mobile home in November because his benefactor gave him an ultimatum: you or the gun.