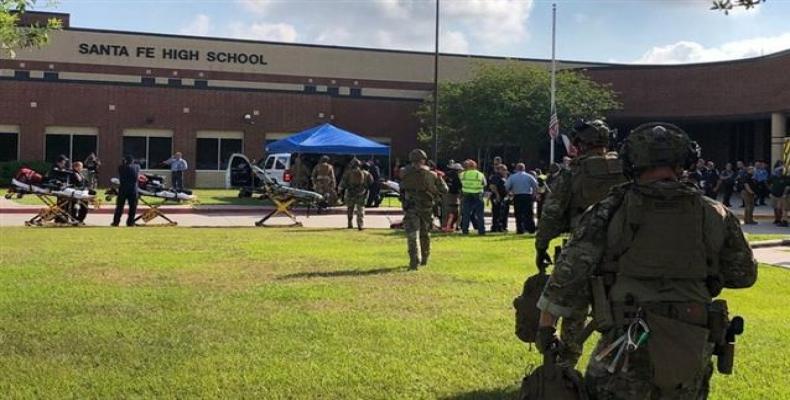 Houston, May 19 (RHC)-- In the U.S. state of Texas, a 17-year-old student dressed in a trench coat and armed with a shotgun and pistol opened fire at his high school outside Houston on Friday, killing nine students and a teacher, before surrendering to officers, authorities said.

Santa Fe High School, southeast of Houston, Texas, joined a long list of U.S. campuses where students and faculty have been killed in a spray of gunfire.  The Texas shooting stoked the nation’s long-running debate over firearms ownership and came about three months after 17 teens and educators were fatally shot in Parkland, Florida.

Students said the gunman, identified by law enforcement as Dimitrios Pagourtzis, opened fire in an art class shortly before 8 a.m. Students and staff fled and a fire alarm triggered a full evacuation.

Classmates described Pagourtzis as a quiet loner who played on the football team. On Friday, they said, he wore the trench coat to school in Santa Fe, about 30 miles (50 km) southeast of Houston, on a day when temperatures topped 90 degrees Fahrenheit (32 degrees Celsius).

Texas Governor Greg Abbott said Pagourtzis obtained firearms from his father, who had likely acquired them legally, and also left behind explosive devices.