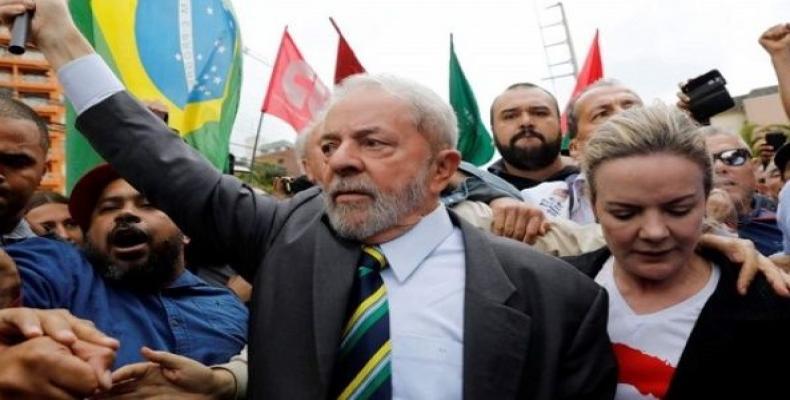 Brasilia, June 26 (RHC)-- The lack of evidence from the prosecution to convict former Brazilian President Luiz Inacio "Lula" da Silva on corruption charges and the large amount of evidence proving his innocence should leave no option but for the court to acquit him.

According to Valeska Texeira Zanin Martin, a lead lawyer in Lula's defense team, new evidence submitted to a federal court in Curitiba where the legal process investigating the former president for alleged fraud is underway, "proves definitely that Lula could not have been given a bribe."

Lula is accused of receiving a beach apartment as a kickback from a Brazilian construction conglomerate in exchange for political favors helping the firm win government contracts. Lula has denied owning the property and slammed the case as a "farce," claiming it is a an attempt to destroy his character and sabotage his candidacy in the 2018 presidential election.

"We have at this point certainty that there's absolutely no way, no chance, that Judge Moro cannot acquit (former) President Lula," Zanin Martin said during a press briefing. "There is absolutely no evidence of wrongdoing and hard evidence of innocence."

"I don't think any judge will want to convict someone with this evidence," she continued. "We have proved it more than once ... All witnesses have cleared Lula."

The politician's legal team presented its final arguments in the case this week.  According to the defense, newly-accessed federal bank files and OAS contracts show that the three-story beach apartment couldn't have been given to Lula as a bribe as prosecutors allege because it is registered in the name of the construction company with financial rights in a federal bank account.  Zanin Martin said that if the company sold the apartment, the money trail would have to appear in the federal bank transactions, where records prove that Lula did not acquire the property.

The lawyer argued that together with other evidence, the bank and the construction contract records — which the defense recently was able to obtain — prove Lula's innocence.  "In 2009 he could not have transferred it because there was an additional mortgage," Zanin Martin said.

"If an impartial and independent investigation had taken place, they would have found these documents," Zanin Martin continued. "The whole trial would have been avoided."

The lawyer said federal Judge Sergio Moro, who oversees the case, had not allowed the defense to access these documents until recently, claiming that the files were not relevant to the investigation. Zanin Martin alleged that the defense was denied access to this evidence.

Zanin Martin accused Moro of being partial and an "accusing judge" by accusing Lula of being the owner of the apartment before and during the trial.  She recalled Moro taking photos with political enemies of Lula, participating in marches against former President Dilma Rousseff, a close ally of Lula, even before the trial began and throughout the legal process.

Lula faces charges in four other corruption investigations. According to Zanin Martin, Moro cannot judge or make any accusations regarding the other four cases in which he is a defendant, he can only rule on the beach-side apartment case.  She added that Lula's defense will prove his innocence once again.  "We will prove it, not only this one but all of them."

The lawyer also raised alarm over attempts to intimidate her team, including claiming that legal team members' phones had been tapped during the process.  Lula's lawyers say the accusations against him are a political move and allege some judges are politically motivated to convict the former president.

Lula da Silva, the most popular president in Brazil's history and leading in the polls for the country's 2018 presidential elections, said Tuesday, "I have proven my innocence and now I want them to prove my guilt."

As part of the final phase of this case, Judge Moro declined to hear more witnesses from both the prosecution and defense, but his ruling does not have a deadline. Moro could also request further investigations and extend his final ruling.  "Any result other than acquittal will be a political result," lawyer Cristiano Zanin said on Tuesday.

In the case that Lula is acquitted, he could run for president in October 2018, as he leads the polls, but lawyers are afraid this political scenario could affect the judges decision. If he becomes president, he still faces four charges that could be taken to the Supreme Court by his opponents.

If Lula is convicted, he can appeal to a federal court, and could not face prison unless the judge rules he is a flight risk or has a concern that the defendant could intimidate witnesses.  If his appeal is not accepted, he could seek an injunction from the Supreme Court.  In the case that none go forward, it would bar Lula from running or any public office for eight years and could impose prison or house arrest.