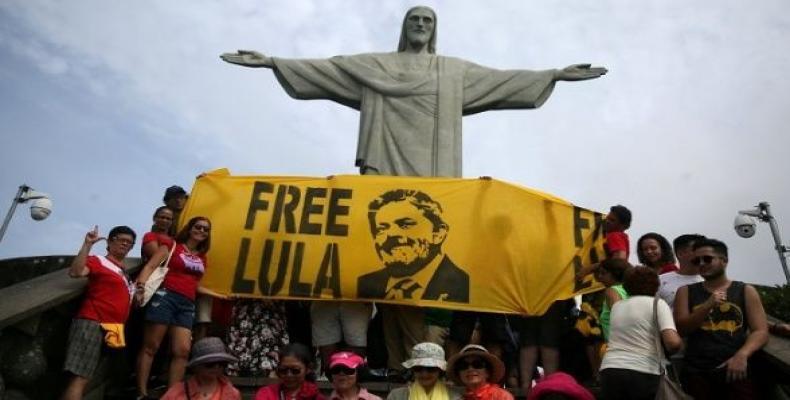 The poll, which was conducted by MDA Institute between May 9th and the 11th in 137 municipalities, confirmed that Lula, co-founder and historical leader of the Workers' Party, or PT, would win the presidency in the first round.  The poll says he would receive approximately twice the amount of votes of his main rival, extreme right-wing candidate Jair Bolsonaro.

The survey indicated that Lula would receive 32.4 percent of the votes, compared to Bolsonaro's 16.7 percent.  Other presidential candidates include Marina Silva (7.6 percent) of the Labor Democratic Party, Ciro Gomes (5.4 percent) of the Brazilian Social Democracy Party, and Geraldo Alckmin (four percent) the former governor of the state of Sao Paulo.

The Workers' Party announced that they will launch an online platform between the end of May and beginning of June to raise funds for Lula's presidential campaign.  It will contain a synthesis of his government program, which is being compiled by the former mayor of Sao Paulo, Fernando Haddad, with assistance from economist Marcio Pochmann and former congressman Renato Simoes, according to Brasil 24/7.

“Our presidential candidate is Lula, and plan B is a full on struggle.  There is no option,” said the national coordinator for the Landless Workers' Movement, or MST, Joao Paulo Rodrigues.

His presidential election victory in 2003 represented the first time the PT assumed control of Brazil's executive branch.  Re-elected in 2006, his two-terms in office marked by a slew of social programs, lifting millions of Brazilians out of poverty and removing the country from the United Nations World Hunger Map. He left office with a record approval rating of 83 percent in 2011, according to Datafolha.