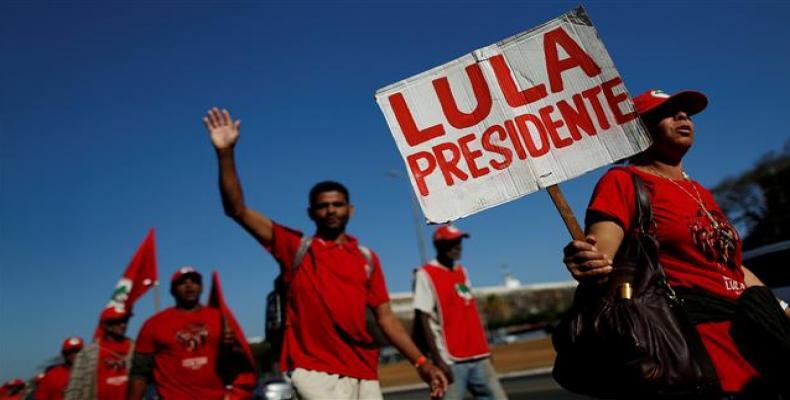 Brasilia, August 21 (RHC)-- Former Brazilian president Luiz Inacio Lula da Silva has increased his support by almost five percentage points and would win Brazil's October presidential election if he is allowed to run, a poll by CNT/MDA showed on Monday.

Electoral authorities have yet to rule on whether Lula can run for president in the upcoming elections.  Despite that, he took 37.3 percent of voter intentions in the latest poll, up from 32.4 percent in the same poll in May.  His nearest rival was far-right candidate Jair Bolsonaro with 18.3 percent, followed by environmentalist Marina Silva with 5.6 percent and business-friendly Geraldo Alckmin with 4.9 percent.

Support for Marina Silva and center-left candidate Ciro Gomes has slipped since the May poll, while support has increased for Bolsonaro and investors' favorite Alckmin, a former governor of Sao Paulo state.  It was the first major poll since candidacies were officially registered last week, but it did not provide results for the likely scenario of a race without Lula.

The nationwide survey of 2,002 people was carried out by pollster MDA for the transportation sector lobby CNT between August 15th and 18th and has a margin of error of 2.2 percentage points.