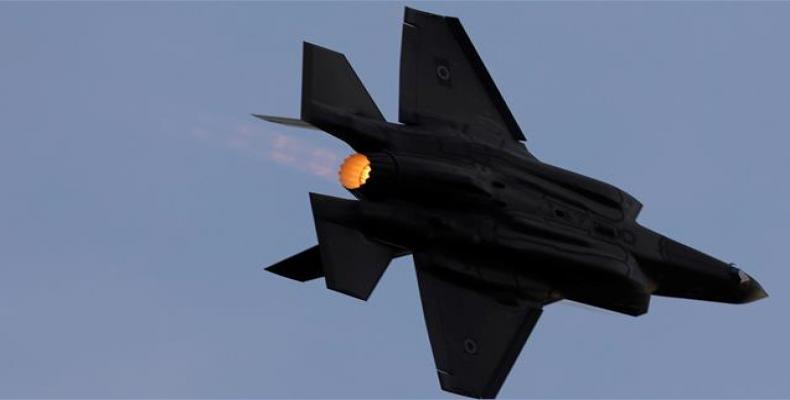 Tel Aviv, May 23 (RHC)-- An Israeli military official says Israel is the first regime to have used the US-made F-35 stealth fighter jets in attack mode, claiming that the fighter jets have been twice used in the Middle East.  "We are flying the F-35 all over the Middle East.  It had become part of our operational capabilities.  We are the first to attack using the F-35 in the Middle East and have already attacked twice on different fronts," Israeli air force chief Amikam Norkin said at a conference in Herzilya.  He also displayed a photo that he said showed one Israeli F-35 over Lebanon's capital, Beirut, without elaborating.

Manufactured by Lockheed Martin Corp, the F-35 is also known as the Joint Strike Fighter and, in Israel, by its Hebrew name "Adir" (Mighty).  Israel was the first regime outside the U.S. to obtain the fighter jet. In December 2016, it received the first two planes out of an order of 50. Tel Aviv has at least nine so far.  Norkin said that the F-35 did not take part in the most recent airstrike on Syria but did in two previous ones.

The Israeli regime has a history of military aggression in the region.  Over the past few years, the Israeli military has launched sporadic attacks against various targets on Syrian soil.

Earlier this month, Israeli jets attacked dozens of targets inside Syria in an unprovoked act of aggression.  On May 10, minister of military affairs, Avigdor Lieberman, claimed that Israel had "hit almost all of the Iranian infrastructure in Syria" in response to a barrage of 20 rockets fired at Israeli military outposts in the occupied Golan Heights.

However, the Syrian ambassador to China, Imad Moustapha, rejected the Israeli claim that its assault had been directed at Iranian infrastructure.

The Syrian military in February hit at least one intruding Israeli F-16 warplane that attacked positions inside Syrian territory, sending it down in flames and smoke.  The warplane was the first to be lost in 35 years, since the regime's war on Lebanon in 1982.

Reports said that the displaying of a photo of the fighter jet flying over Lebanon is considered an implicit threat to the Lebanese resistance movement of Hezbollah.

The Israeli regime has waged three wars on Lebanon -- in 1982, 2000, and 2006. It has also carried out assassinations in Lebanese territory.

Since its establishment in 1985, Hezbollah has helped the army defend Lebanon both in the face of foreign aggression, including in the 2000 and 2006 wars, and against terrorism.  Hezbollah has also been a strong force in the battle against terrorism in the region. It has fought the Daesh terror group in Lebanon, Syria, and Iraq; and its well-trained anti-terror units have dealt heavy blows to terror groups across the region.
The Israeli military also frequently bombs the Gaza Strip, with civilians being the main target of such attacks.

On May 17, Israeli fighter planes carried out bombing raids on several locations in northern Gaza.  Israel has also launched several wars on the Palestinian coastal sliver, the last of which began in early July 2014. The military aggression, which ended on August 26, 2014, killed nearly 2,200 Palestinians. Over 11,100 others were also wounded in the war.