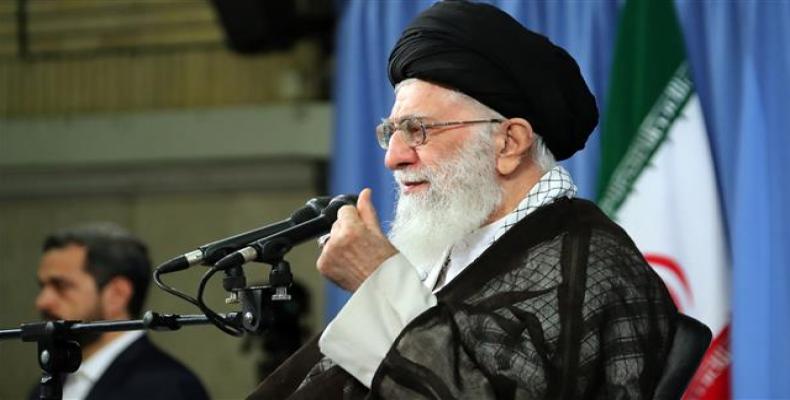 Tehran, June 30 (RHC)-- The Leader of the Islamic Revolution Ayatollah Seyyed Ali Khamenei has strongly denounced the Western states for their pretense of advocating human rights while in reality supporting terrorist groups and acts of terror.

Addressing the staff of Iran's Judiciary at a meeting in Tehran, Ayatollah Khamenei made reference to human rights violations committed by the United States in various parts of the world as well as France and Britain's crimes over the past several decades which took place in Africa and the Indian subcontinent.

Khamenei added that the West's support for the Daesh terror group in Syria and the atrocities being committed in Myanmar and elsewhere "is indicative of the repeated lies of the shameless fake human rights advocates."

Ayatollah Khamenei said when it comes to the issue of human rights, it is actually the Islamic Republic that stands in the position of the true advocate of human rights as opposed to "the criminal Western pretenders."

The Iranian leader expressed satisfaction with the Judiciary's work in restoring the Iranian nations' rights in the face of bullying powers, and he criticized certain people who seek to create the impression among the public that there is "systemic corruption" within Iranian state institutions.

Corruption does exist in a number of governmental and commercial enterprises, "but the existence of systemic corruption is not true," he said.  "This wrong impression should not be allowed to affect the public opinion."

Ayatollah Khamenei further stated that foreign enemies and certain oblivious elements at home have made the Judiciary the target of the most severe propaganda and media pressure.

In order to effectively confront this massive propaganda campaign, Khamenei suggested, the judicial system needs to develop a strong and skillful media arm.