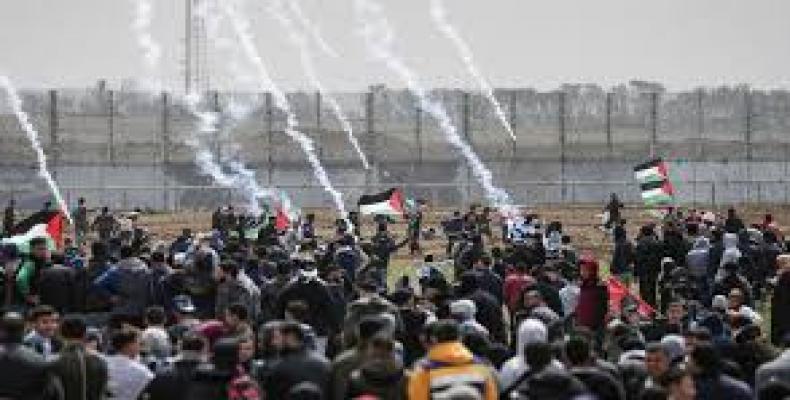 Gaza City, April 1 (RHC)-- At least four protesters were killed by Israeli troops and more than 10 others wounded as Palestinians stage massive rallies along the Israel-Gaza border -- part of the resistance campaign launched exactly one year ago.

One 17-year-old Palestinian died on Saturday after he was shot in the face by the IDF while protesting near the border fence, Gaza health officials said.  Overall, 13 people are said to be wounded by Israeli live fire during the rallies.

By some estimates, between 30,000 to 40,000 protesters, many holding Palestinian flags, have gathered across the border fence to denounce the Israeli occupation of the West Bank and the blockade of Gaza.  Several groups of Palestinians made attempts to charge at the border fence, while Israeli security forces launched tear gas at the protesters.

Saturday marked one year since the massive protest campaign was launched.  The months-long standoff with Israeli forces left at least 189 Palestinians killed, and more than 6,000 wounded, according to the United Nations.

The protests, dubbed ‘Great March of Return’, intensified last May after U.S. President Donald Trump announced his controversial decision to move the American embassy from Tel Aviv to Jerusalem. This was part of his promise to recognize Jerusalem as Israel’s capital.  The step was warmly welcomed by the Israeli government, but fervently denounced by Palestinians.  It also received a mixed reaction among Washington’s Western allies, who pointed out that the decision is not only illegal under international law, but also likely to fuel tensions in the region.