Trump administration tells parent to pay $1,900 to be reunited with child 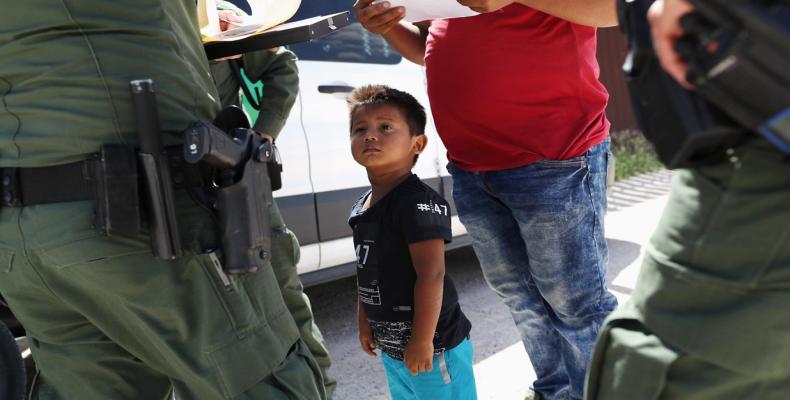 New York, July 16 (RHC)-- The American Civil Liberties Union (ACLU) reports that migrant parents who were forcibly separated from their children at the southwest border have been asked to pay for the costs of reunification.

One migrant parent was initially told to wire around $1,900 to Western Union to pay for reunification, the ACLU alleged in a court filing.  Another parent arranged to pay for a plane ticket for their child to return to them before being told to cancel because someone else purchased it.  It’s unclear whether these parents or any other migrants ultimately paid for any part of the reunification process.

Thousands of families have been separated as part of the Trump administration’s “zero tolerance” immigration policy of prosecuting all adults crossing the border without documentation.  At least seven families were separated even when they presented themselves for asylum at an official port of entry, which Trump administration officials have denied is happening.

In late June, a federal judge told officials to reunite families it had separated as part of its deterrence policy.  The administration identified as many as 3,000 separated children in the custody of the Department of Health and Human Services (HHS), and was tasked to reunite roughly 100 of those under 5 years old by last week. Officials ultimately failed to meet the court-mandated deadline, reuniting only 58 of 103 children.  The next deadline is July 26th, when officials must reunite all kids with their parents.

Not only did officials miss the deadline to reunite families with young children, but the ACLU also identified other flaws in the reunification process, including reports that migrants were told to pay for travel and DNA testing.  Officials also didn’t communicate with the ACLU, lawyers contend.  They didn’t tell them where families were reunited and dropped off, leaving one mom and her six-month-old child at a bus stop alone until midnight when they finally obtained a ticket.

“It is not acceptable for Defendants to make compliance with this Court’s injunction contingent on Class Members paying thousands of dollars to reunify with their children,” wrote ACLU lawyers in the court filing.  “Plaintiffs therefore ask the Court to order Defendants not to charge Class Members for any of the costs of reunification, including DNA testing and air travel, and to reimburse any individuals who were in fact charged.”

Shelters told the Daily Beast that four migrant women were told by government officials to pay for DNA testing in order to be reunited with their children.  Officials have been swabbing the cheeks of every parent and child to quickly verify parentage, and pledged to destroy swabs after verification is done.  The judge said that the DNA testing of every child and parent is unnecessary and ordered officials to further streamline the process.  Officials have since reportedly changed the policy.