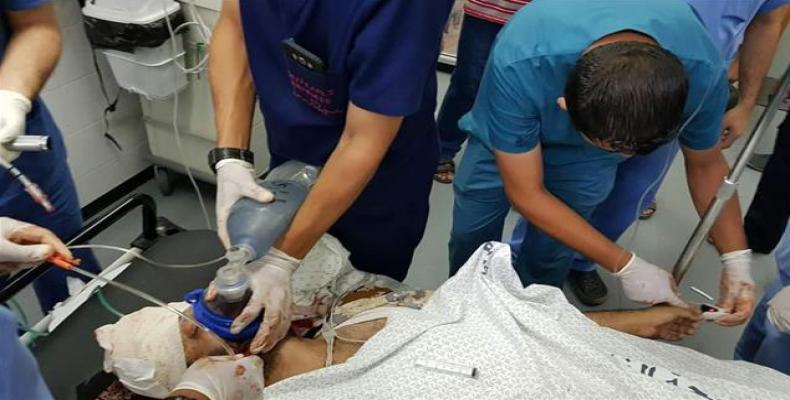 Gaza City, July 20 (RHC)-- At least one Palestinian man lost his life and three others sustained injuries when an Israeli fighter jet launched an airstrike against an area in the southern part of the Gaza Strip as the Tel Aviv regime continues with its acts of aggression against the impoverished coastal sliver.

The spokesman for the Gaza Ministry of Health, Ashraf al-Qidra, said in a statement that 22-year-old Abdel-Karim Radwan succumbed to his severe injuries at the European Gaza Hospital on Thursday afternoon.  Local sources, requesting anonymity, said the Israeli aircraft fired a missile at a group of young people near Sufa area, which is located southeast of the border town of Rafah.  Four young Palestinian men were injured as a result and one of them later died from his injuries.

The Israeli military later confirmed it had carried out the airstrike, claiming that it targeted members of the Hamas resistance movement who were about to launch incendiary balloons over the border into occupied territories.

Nearly 145 Palestinians have been killed by Israeli forces ever since the “Great March of Return” began in the Gaza Strip on March 30th.  A total of 14,811 Palestinians have also sustained injuries, of whom 366 are still reportedly in critical condition.

The Gaza clashes reached their peak on May 14th, on the eve of the 70th anniversary of Nakba Day (Day of Catastrophe), which coincided this year with the U.S. embassy relocation from Tel Aviv to occupied East Jerusalem.

On June 13th, the United Nations General Assembly adopted a resolution, sponsored by Turkey and Algeria, condemning Israel for Palestinian civilian deaths in the Gaza Strip.  The resolution, which had been put forward on behalf of Arab and Muslim countries, garnered a strong majority of 120 votes in the 193-member assembly, with 8 votes against and 45 abstentions.

The resolution calls on UN Secretary General Antonio Guterres to make proposals within 60 days “on ways and means for ensuring the safety, protection, and well-being of the Palestinian civilian population under Israeli occupation,” including “recommendations regarding an international protection mechanism.”

It also calls for “immediate steps towards ending the closure and the restrictions imposed by Israel on movement and access into and out of the Gaza Strip.”