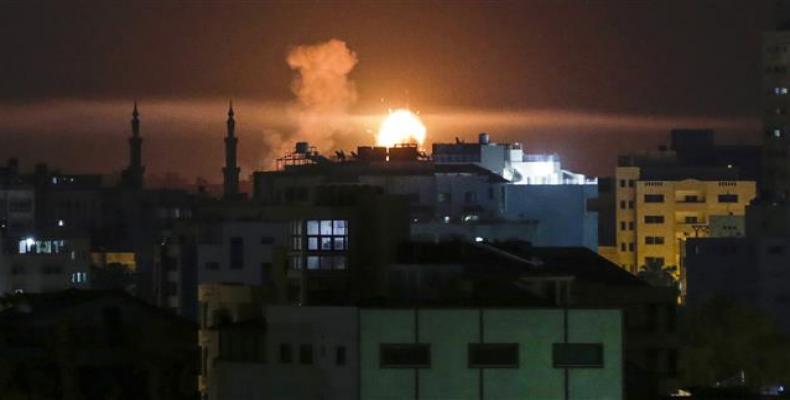 Gaza City, June 4 (RHC)-- Israeli fighter planes have carried out multiple airstrikes on a series of locations spread out through the Gaza Strip.  Over the weekend, Israeli warplanes launched attacks on central, southern and eastern parts of the besieged enclave.  Earlier, on Saturday, Israeli tanks also fired upon the coastal area.

The Israeli army has confirmed the attacks, claiming they were launched in response to rockets fired at the occupied territories.  The airstrikes come just a few days after two sides agreed on a ceasefire following heavy Israeli airstrikes.

Amid the flare-up in the Gaza Strip, Hamas said Palestinian resistance groups have agreed to a ceasefire in the blockaded coastal sliver as long as Israel abides by a truce.

Tensions have been running high along the Gaza fence since March 30, which marked the start of a series of protests, dubbed “The Great March of Return,” demanding the right to return for those driven out of their homeland.

The Gaza clashes reached their peak on May 14th, the eve of the 70th anniversary of the Nakba Day (the Day of Catastrophe), which coincided this year with the U.S. embassy relocation from Tel Aviv to occupied Jerusalem.  At least 65 Palestinians were killed and more than 2,700 others wounded as the Israeli forces used snipers, airstrikes, tank fire and tear gas to target the Gaza demonstrators on May 14th.