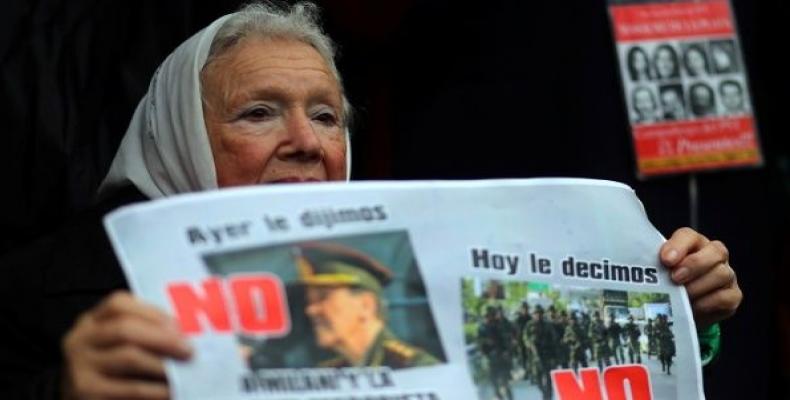 Buenos Aires, August 1 (RHC)-- Argentinean President Mauricio Macri has continued to defend his decree that allows military forces to engage in domestic security affairs insisting that the population will have more "peaceful" and "secure" by putting 70,000 armed force members on the streets.

During a ceremony with Cordoba governor Juan Schiaretti, the president told the press that "the armed forces can play a very important role (against) the global threats of the 21st century," mainly terrorism, cyber attacks and drug trafficking.

According to the president, the domestic use of the military "will help to guard the borders and provide logistical support to the internal security forces."  The organization Daughters and Sons of the Genocide said in a statement regarding Macri’s presidential order signed last Tuesday: "When they talk about 'fight against terrorism,' they talk about repression of social protest.  When they mention 'fight against drug-trafficking,' they mean repression of social protest.

"During six years, the military government justified the most horrendous crimes with the pretext of the fight against terrorism, including crimes against humanity, in order to impose an economic model protecting the interests of the oligarchy and international economic groups," read the communique.

Last Thursday, thousands of people in country’s major cities demonstrated in the streets to protest against the decree that reminds most Argentineans of the worst years of the dictatorship.  "The Armed Forces are prohibited from getting involved in issues of internal security," the Center of Legal and Social Studies, or CELS, said in a statement against decree 683/18.

During the Cordoba event, the president went on to say that other presidential candidates during the 2015 campaign proposed the same military intervention, referring to Daniel Scioli and Sergio Massa. "Two and a half years ago, the candidates I competed with proposed exactly the same" policy.

Macri added that opposition to his policy "isn’t good because it’s insincere. Honesty and a constructive attitude are the values we need to construct an Argentina where all Argentineans have opportunities."

Last Wednesday, July 25 the day after Macri’s order went enforce, members of Argentina’s congress presented a new measure to repeal the decree.  "By means of a simple decree (Macri) is trying to change the basis on which our national defense system is built, constructed during our transition to democracy," the bill states.