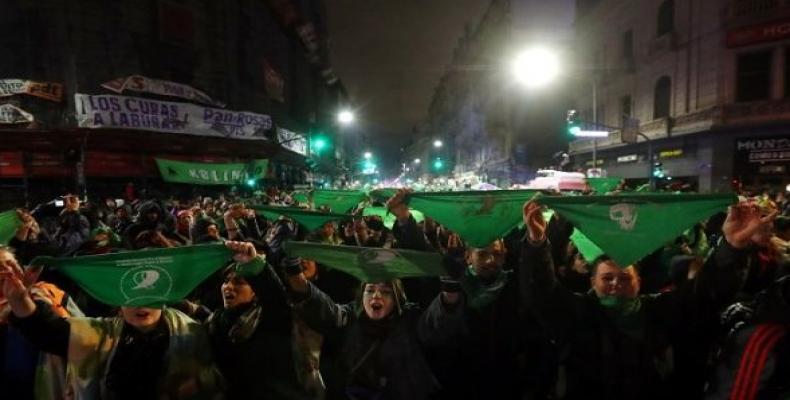 Buenos Aires, August 15 (RHC)-- In Argentina, thousands of women and men in favor of legal, safe and free abortion, are renouncing their membership in the Catholic Church, after last week's Senate vote against the bill of Voluntary Interruption of Pregnancy (IVE).

The action has been called for by the Argentinian Coalition Laic State (CAEL).  They are asking that people that were baptized and don't feel identified with the Catholic institution, resign. They argue that the Catholic church receives governmental contributions that depend on the number of people affiliated with the church and those registered at the moment of baptisms.

After the Senate rejected the law of Voluntary Interruption of Pregnancy, thousands of Argentines have decided to renounce the religious institution. The campaign against this law was mainly supported by the Catholic church.

As member of CAEL Fernando Lozada explained to local media, "for those who are not represented by the (Catholic) Church, it is an act of disaffiliation, as if, at an early age, they had enrolled us down in a club or in a political party with which we do not agree ".

One of the founding members of Argentina's Mothers of Plaza de Mayo movement, Nora Cortiñas, has vowed to quit the church after the Argentine Senate rejected the abortion bill, saying: "I'm very sad because I'm Catholic and I'll apostasize.  I believe in God because without it I wouldn't be here, all of us, because there's a God, but I'm ashamed of the Catholic Church."

In a statement, the CAEL highlighted that "the separation between religion and the State is fundamental so that all citizens have 'an equal ground' regardless of the beliefs and conviction they may have."

According to the information shown by the organization, the Argentine State contributes over $682 million to the Catholic church, without taking into account the tax reductions, and this financial support is proportional to the number of people baptized and registered as part of the Church.