UN to open Palestinian schools on time despite funding shortages 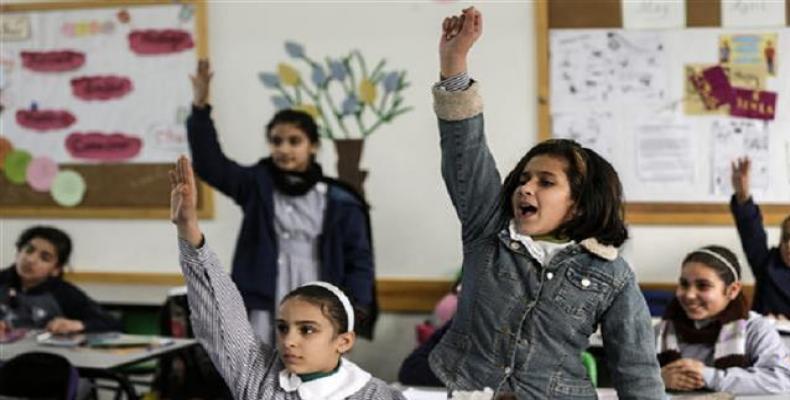 United Nations, August 17 (RHC)-- A United Nations agency says schools teaching half a million Palestinian refugees will reopen across the Middle East on time despite funding shortages triggered by a U.S. decision to withhold aid to the Palestinians.

The UN Relief and Works Agency for Palestine refugees (UNRWA) said in a statement that all 711 schools it runs for 526,000 pupils in the Palestinian territories, Jordan, Lebanon and Syria would open as planned later this month.  The schools are due to open over a staggered time period between August 29 and September 2.

The agency also said it lacked funds to pay the 22,000 teachers in its educational network in the besieged Gaza Strip, the occupied West Bank and East Jerusalem, as well as Jordan and Syria.

Meanwhile, at a specially convened session of the UNRWA Advisory Commission in Amman, Commissioner General Pierre Krahenbuhl said that since the beginning of the year, the agency had received $238 million in additional contributions after a funding drive but was not "out of the woods" yet.

Krahenbuhl said the agency only had cash to keep its services operating through September.

"We currently only have funding to run the agency's services until the end of September," Krahenbuhl said, adding, "We need a further $217 million to ensure that our schools not only open but can be run until the end of the year."

There had been warnings from UN Secretary General Antonio Guterres and others that the schools might not be able to open due to funding cuts after US President Donald Trump decided to slash funding to UNRWA. The body has faced a $300 million freeze in funding from the United States.  Other countries have since provided additional contributions, but UNRWA says it is not enough.

Last month, the agency announced it was cutting more than 250 jobs in the Palestinian territories due to the funding crisis.  UNRWA is tasked with providing assistance and protection to a population of some five million registered Palestine refugees.