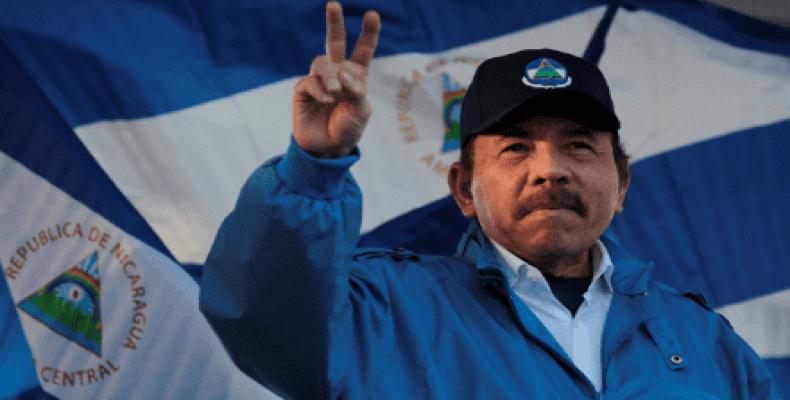 Managua, September 11 (RHC)-- Nicaraguan President Daniel Ortega says he is open to meeting U.S. leader Donald Trump at the United Nations Security Council meeting this month despite that fact that he feels “under threat” from the country’s military amid interventionist comments and actions from the U.S. along with its regional right-wing governments.

U.S. government officials have not responded to Ortega’s comments, but the United States government is moving forward to apply the Nica Act (Nicaraguan Investment Conditionality Act) passed in October 2017 to slap sanctions on the Central American country much like it has on Venezuela.

However, Ortega said that if given the chance, he would meet with President Trump at the upcoming United Nations General Assembly (UNGA) scheduled to take place in New York City beginning September 24th.  "The idea of having a dialogue with a power like the U.S. is necessary," said Ortega, and that going to the UNGA summit, "could be an opportunity (to meet Trump). ... I'd like to go."

The Nicaraguan president added: “I don’t think that Nicaragua is on President Trump's agenda,” in terms of trying to overthrow his government in a soft-coup.  He says those ambitions, “have their roots in Florida,” referring to right-wing business leaders and politicians within the state with strong ties to the Central American country.

Last week, the United States ambassador the U.N. Security Council, Nikki Haley, pushed forward with including Nicaragua and Venezuela on the September meeting agenda, despite not having a 15-member consensus.  China, Russia, Bolivia, and Ethiopia rejected the proposal saying the two Latin American countries don’t pose an international security threat.

Though he expressed interest in talking with Trump during the interview, Ortega added that if the United States wants to “contribute to peace, stability in Nicaragua and the region, they simply have to be respectful of the decisions that Nicaraguans make and not be conspiring against governments that are not enemies of the US. We are enemies of submitting ourselves to US policies," said Ortega, reiterating again that the U.S. should "not mess with Nicaragua."

The U.S. government has long sought to suppress Daniel Ortega, who first came to power in 1979 as part of a junta overthrowing the Somoza dictatorship.  Voted in several times as president for the Sandinista National Liberation Front (FSLN) party, Ortega has implemented a number of social welfare programs, including land redistribution and greater access to health and education.

Between April and August of this year, 270 people died and over 2,100 were injured during major national protests in Nicaragua, according to Nicaragua's Commission for Truth Peace and Justice. Demonstrations initially began over state plans to increase social security contributions in order to bridge a budget deficit.  Those demonstrations were quickly co-opted by violent opposition groups demanding Ortega's resignation.

When asked by France 24 TV about the stalled peace talks in his country, the FSLN leader responded that “an attempt was made, it simply did not work," but added that he wants to restart dialogue with opposition leaders and had approached Spain and Germany to help play a role.  For the moment, said the Nicaraguan president, the dialogue is "in the community, in the neighborhood, among the population ... among the people."