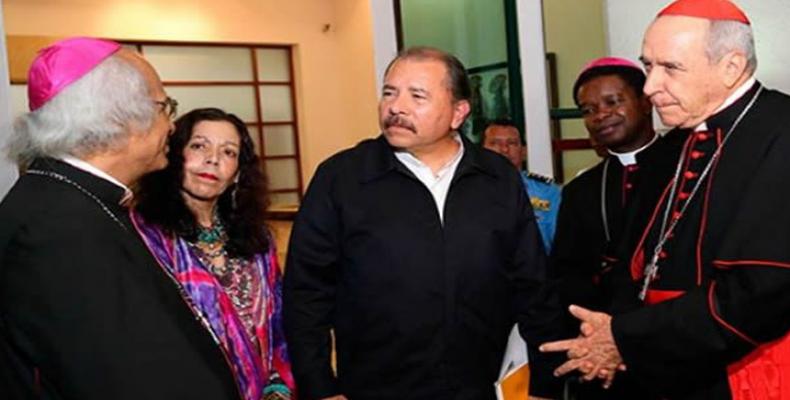 Managua, July 20 (RHC)-- Nicaraguan President Daniel Ortega has strongly criticized the religious hierarchy in his country for taking sides, instead of mediating in the national dialogue.

Speaking Thursday in Managua at a rally to celebrate the 39th anniversary of the Sandinista Revolution, the Nicaraguan leader disqualified the role of the bishops of the Episcopal Council as mediators and witnesses in the national dialogue, and described them as partial and in favor of a coup d’état.

Ortega added that the bishops do not understand that the role of a mediator is to sit with both parties, listen to what they have to say, and not to take sides or impose unrealistic deadlines.

The president said that during his conversation with the religious leaders, they told him that early elections had to be called, the judicial system had to be changed as well as the institutions of the state.

The president argued that he did not want to believe that the president of the Episcopal Conference, Cardinal Leopoldo Brenes, was aware of the fact that many churches were being used as barracks to store weapons, to store bombs and as platforms to launch attacks.

Ortega noted that it was very unfortunate that for the Episcopal Conference the victims, the dead and the ill-fated are only on one side, ignoring the others, as can be clearly seen in their statements during the three months of crisis.

"Even when they refer to the Nicaraguan people, it seems that they are making reference to one part, the one that opposes the government. The rest is not the people, but merely ‘Sandinista mobs', 'paramilitaries' and 'parapolice," he said.

Members of the Episcopal Conference have publicly incited civil disobedience and supported calls for a national strike, even though the consequences of this measure are disastrous for the most vulnerable families.