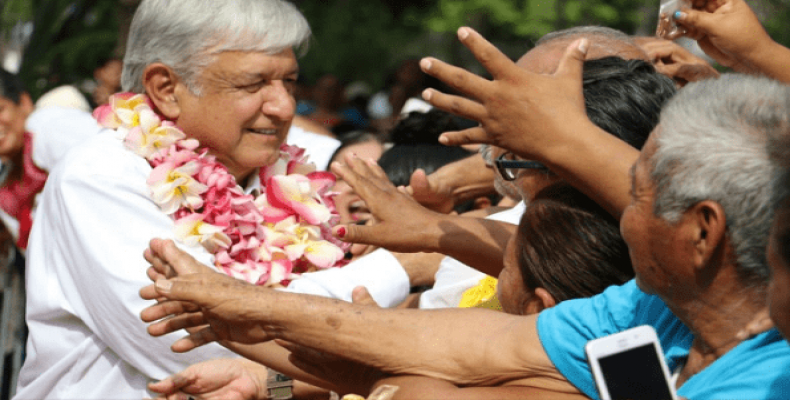 Mexico City, September 22 (RHC)-- Mexican President-elect Andres Manuel Lopez Obrador (AMLO) was in the state of Oaxaca, at the one year anniversary of the fatal earthquake that shook Mexico City, to announce an over $532 million recovery plan for the southern states’ 8.2 quake that affected well over two million people and killed 78 in Oaxaca alone on September 7, 2017.

Hundreds of thousands of families in Oaxaca and Chiapas are still in need of assistance to rebuild homes damaged or destroyed from last year’s September tremor, and the February 18th quake that hit Oaxaca’s coast.  Dozens of municipalities still need help fixing damaged infrastructure and social programs in Mexico’s two most Indigenous-populated states that have long been neglected of state funds.

Lopez Obrador offered condolences to the families of the victims of the September earthquakes saying they were “our sorrow and sadness, as well as the hope of a more just society.”  Pledges of financial help from the soon-to-be head of state prompted Oaxacan state governor Alejandro Murat Hinojosa to announce that “AMLO is the president of the southeast.”

Lopez Obrador said that corruption in Mexico was over and that state subsidies will be delivered immediately after his December 1st inauguration, without political middlemen.  The anti-graft AMLO warned those who listened to him in Juchitan, a city hard hit by the September 2017 quake, that the “robberies are done.”  He warned: “We are going to manicure with a hatchet” those tempted to steal money from the government.

AMLO said that political prisoner teachers will be released and the so-called educational reform will be canceled.  Current President Enrique Peña Nieto shifted education control from unions to the state in 2013, prompting massive protests over the past three years.  Yet the future head of state made a jab at teachers telling them they were required to teach the entire work week, not just from Tuesday until Thursday.

The future military chief said he will not use the armed forces to repress people or act with authoritarianism, referring to the current administration’s continuing use of the military to police the country.  Mexico's military has been implicated in the deaths of over 3,900 Mexicans between 2007 and 2014, according to government numbers.

“Let's look for unity, reconciliation.  We have already suffered discrimination.  This (administration) will not be the same,” AMLO told crowds in rural Oaxaca.

In Mexico City, on the anniversary of the 7.1 magnitude quake that killed over 360 people in the capital on September 19, 2017, thousands of people took to the streets to mourn those who died. They also demanded that the government distribute the recovery money it promised, particularly for the dozens of still-damaged schools, and to prosecute those responsible for allowing the faulty building construction that led to so many deaths.