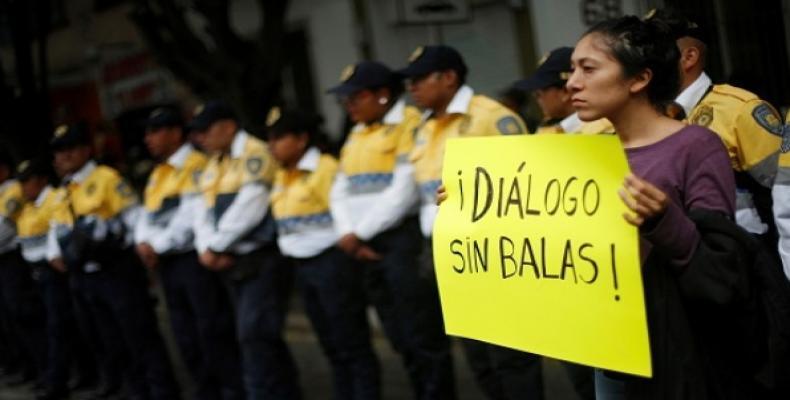 Mexico City, June 23 (RHC)-- Hundreds of thousands of Mexican doctors went on strike in over 70 cities on Wednesday to protest neoliberal health reform and to support the heavily-repressed mobilizations of teachers and their supporters against education reform in Mexico’s southern, largely Indigenous states.

Strikers wore red and black ribbons to represent the violence they face as the consequence of crimes like kidnappings, enforced disappearances and killings that have gone unpunished by authorities. Doctors also criticized the lack of infrastructure in hospitals needed for access to healthcare.

Social media was flooded with accusations of deaths due to unattended hospitals and of sexual abuse by doctors, but activists warned of fake accounts and Twitter bots.

They also expressed solidarity with the teachers of the CNTE union, whose protests on Sunday were faced with severe police repression and ended in up to 12 dead.  The doctors are joining the ongoing national general strike by teachers, including in the southern states of Oaxaca and Guerrero, where the teachers’ protests have been especially strong. Both are denouncing impunity and the refusal of the government of President Enrique Peña Nieto, who has been leading the reforms, to meet with the strikers without preconditions.

The group #YoSoyMedico17, which is comprised of doctors, pediatricians, surgeons, anesthesiologists and nurses, has been joined by more than 200,000 physicians from 32 states in opposing the so-called Universal Health System reform by Peña Nieto. The medical professionals say the measure is a "disguised way of privatizing health in Mexico," and said doctors were not consulted on the reform, according to Animal Politico.

President Peña Nieto has introduced a number of radical measures, including 11 neoliberal structural reforms in education, health and the energy sector, during his first 20 months.

This Tuesday, in a dramatic turn of events, the government announced high-level talks with  that Interior Minister Miguel Angel Osorio Chong would meet with union representatives.