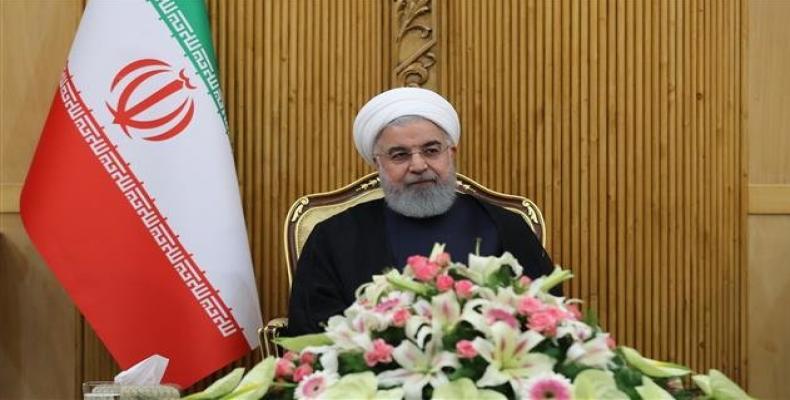 Tehran, September 24 (RHC)-- Iranian President Hassan Rouhani says the United States wants to cause insecurity in Iran with the help of "small mercenary states" in the region, but that the Islamic Republic is ready to confront them.

Rouhani's remarks in Tehran Sunday before leaving for New York to attend the UN General Assembly came a day after terrorists attacked a military parade in Ahvaz in southwest Iran, killing 25 people.

"Americans want Iran to have no security.  They want to create chaos and turmoil and set the conditions so that they can return to the country one day and take charge as they did in the old days, but none of this is possible," the president said.  "These are unattainable dreams and America will never achieve any of these goals," Rouhani added.

He touched on Washington's hostile policies toward Iran, including its withdrawal from an international nuclear deal with Tehran under "delusional excuses," putting a nation under strain.  "Our people will resist and the government has prepared itself for this confrontation," he said, adding that everyone will "join hands to put these difficult times behind us with the grace of God."

"The Americans will regret what they did because they made a very wrong choice", the president added.  Rouhani also said the U.S. is provoking regional states against Iran, citing the terrorist attack in Ahvaz, which also left scores of people, including women and children, injured.

"It is entirely clear to us who did it, who they are and where they are affiliated to," he said.  "The sponsor of all these small mercenary countries in the region is America.  Americans are provoking them and providing the right conditions for them to commit these crimes," Rouhani added.

The president said these acts will have no effect on the will and direction of the Iranian nation which "has stood up and resisted much bigger crimes."

Terrorists opened fire on people watching a military parade in Ahvaz.  The Saudi-backed al-Ahvaziya terror group, which is based in Europe, has claimed responsibility for the assault.

Members of the terror group had reportedly lived inside Iraq for years but Iran granted them amnesty after the end of the Iraqi-imposed war in 1988.  Nevertheless, "they have never regretted or stopped their crimes," he added.

Rouhani described the Saturday attack as a "big crime" which will not go unpunished.  "Iran's answer to these crimes will be within the framework of law and the country's national interests," he said as he paid tribute to the residents of Ahvaz.

"In the early months of the war, there were days when cannonballs would smash into the streets of Ahvaz and I saw them, but the residents did not evacuate the city and stayed put and resisted," he recounted.

Elsewhere in his remarks, Rouhani hit out at the U.S. for abusing the UN which Trump reportedly plans to use for a series of speeches to push a hard line against Iran.  A year after he shocked his counterparts by threatening to "totally destroy" North Korea in his inaugural UN address, Trump is expected to outline his confrontation with Iran, global trade and his "America first" view of foreign policy.