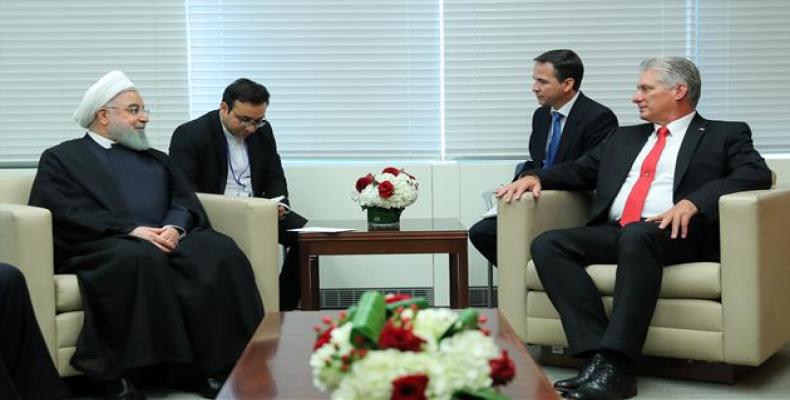 United Nations, September 25 (RHC)-- Iranian President Hassan Rouhani has called on the global community to stand up to Washington's violations of international agreements and regulations, saying it is especially in the interest of independent nations to unite against U.S. bullying and interventionist policies.   Rouhani made the remarks in meetings on Monday with world leaders on the sidelines of the 73rd session of the United Nations General Assembly in New York.

In a meeting with his Bolivian counterpart, Evo Morales, Rouhani emphasized the need for both the Iranian and Bolivian nations to put up resistance to American interventionism and unilateralism.

Touching on the U.S. unilateral withdrawal from the 2015 nuclear deal, Rouhani said: "The international community must stand firmly against the Americans' violation of this agreement."  The Iranian president said: "Today, the international community, with the exception of a few countries, has adopted a decisive stance on the US move, and we should try to show that those who breach international laws will never have the approval of the world's public opinion.”

Back in May, President Donald Trump pulled the US out of the 2015 Iran deal, officially known as the Joint Comprehensive Plan of Action (JCPOA), despite objections from the other signatories to the accord.

Besides re-imposing the anti-Iran sanctions it had lifted under the accord, the Trump administration has also been seeking to discourage the European firms from doing business with Iran by threatening them with penalties.

Rouhani also touched on Washington's stepped-up pressure campaign against Iran in an interview with NBC News.  The Iranian president said he had no plans to meet Trump during his visit to New York as long as the White House was sticking to its policy of sanctions and threats against the Islamic Republic.

"There is no such program for a meeting," he said.  "Naturally, if someone is keen on having a meeting and holding dialog and creating progress in relationships, they would not use the tool of sanctions and threats [and bring] to bear all of their power against another government and nation. That means that the necessary willpower for resolving outstanding issues is absent."

After leaving the nuclear deal, the United States re-imposed a first tranche of economic sanctions against Iran in August and is due to re-introduce sanctions on the country's oil and gas industry as of November 4.

In an effort to cut Iran's oil exports effectively to zero, Washington has been lobbying its allies to cut their crude imports from the Islamic Republic.   Rouhani further emphasized that Iran could withstand U.S. economic sanctions and described Washington's threats to choke off Iranian oil exports as an "empty threat."

"The United States is not capable of bringing our oil exports to zero," he told NBC.  "It's a threat that is empty of credibility. Perhaps on this path, we will sustain certain pressures but the United States will certainly not achieve its objective."

In a meeting with Christine Lagarde, managing director and chairwoman of the International Monetary Fund (IMF), Rouhani stressed that the organization's main responsibility is to protect its members against banking and monetary sanctions.   "The IMF should demonstrate that it can play a role in [protecting] the economic stability of a member, and I hope that it can take a positive step in this regard," he said.  Lagarde, for her part, gave assurances that the IMF would continue its cooperation with Iran.

He referred to the recent deadly terrorist attack in the Iranian city of Ahvaz, saying the incident underlined the need for unity in the fight against terrorism.  "Many terrorist groups in the region have either been created by or have the support of America," he said.

On September 22, terrorists opened fire on people who had gathered in Ahvaz to watch an annual parade marking the former Iraqi dictator Saddam Hussein's invasion of Iran in the 1980s.  At least 25 people, both military personnel and civilians, were killed and dozens more sustained injuries.   The "al-Ahwaziya" terrorist group, which receives backing mainly from Saudi Arabia, claimed responsibility for the attack shortly after it was carried out.  Additionally, the terrorist group of Daesh claimed it was behind the attack and published online purported footage of the assailants.