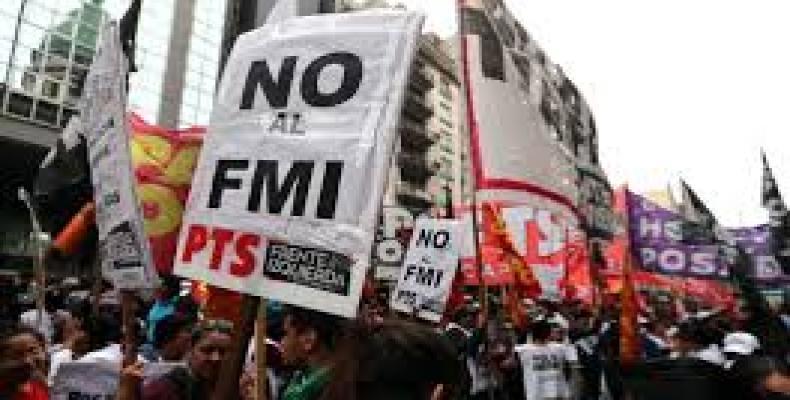 Buenos Aires, October 10 (RHC)-- Protests continue in Argentina over announced increases in gas prices, while the country's energy secretary says that it's only supporters of Cristina Kirchner who are “complaining” about the previously-announced retroactive charge in gas.  "Most of the people who complain about the increase in gas (prices) are Kirchnerists," said Energy Minister Javier Iguacel during a radio interview in Argentina.

Earlier, the government announced Resolution 20/18 of the Secretariat of Energy which states that the public will have to back pay on natural gas they consumed between April and September of this year.   "More than half of those who complain about the increases are militants who want to create fear" in the country. The energy secretary, appointed by right-wing Cambiemos President Mauricio Macri last June, accused supporters of the current Left-leaning senator and former President Cristina Fernandez (Kirchner) of generating "disinformation through lies."

Per the resolution, consumers will have to retroactively pay approximately 10 billion pesos, over $264 million, to gas producers because the April-September gas rate was approved by Enargas in March 2018 when the peso averaged 20.55 to its pegged U.S. dollar.  However, the Argentinean peso value crashed in early May and has hovered between 35 and 40 since late then, hitting 43 around late August.

The government is now forcing users to make up for its own role in devaluing the peso and they'll have to make the back payments in up to 24 installments starting in January 2019.  This scheme was originally proposed by Metrogas at a public hearing on Tuesday, September 4.  The major gas company also requested a gas rate hike of between 94 and 200 percent to compensate for the set gas price that didn't keep pace with the devalued peso or inflation that has risen to 34 percent over the past several months. The gas price increase will likely be around 35 percent, a hike that the secretary said in late July would be "no more than 30 percent."  This rate increase will also begin in January.

Iguacel explained to Radio Miter: The payouts "are not a compensation to the oil companies" but a "difference (in payment) of the price that must be paid … from the summer."  In an attempt to stimulate the economy, in November 2017 the government decreed that "invoices will be issued in dollars and payable in pesos at the (day’s) exchange rate."

Just as Macri has continually tried to blame the previous Kirchner administrations (2003-2015) for his current government’s economic crisis, Iguacel too accused the former president and current Senator Cristina Fernandez of spreading "misinformation" regarding the back pay to the oil companies.

"They are militants who want to frighten people with lies," said the secretary on Saturday. "More than half of those who say that a lot of them have checked with me and end up acknowledging that they had a gas leak.”  The secretary added that 70 percent of households will pay less than 700 pesos (around $18.50) per month even after the 34.7 percent increase.  "That’s less than the price of cable TV subscription.”

The comments come as unions and civil society organizations have staged months of massive demonstrations against the government's suite of austerity measures that include over 1,000 percent energy and water hikes and 73,800 in job cuts, half of which are in the public sector since Macri took office in 2015.

The added energy expenses will be thrown back onto consumers who are already facing a 25 percent poverty rate, 9.7 unemployment, and a 4 percent rise in food prices.