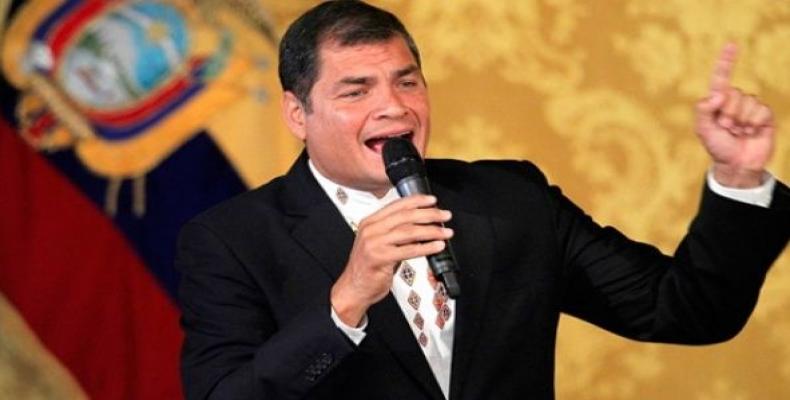 Brussels, October 24 (RHC)-- Former Ecuadorean president Rafael Correa says his country's government will extradite WikiLeaks founder Julian Assange -- who has taken shelter in the Ecuadorian Embassy in the UK -- to the United States, despite its legal obligation to protect the Australian national, who has also obtained Ecuadorean citizenship.

Correa told Russian English-language news channel RT that he believed the government of President Lenin Moreno was "going to turn over Assange to the U.S. government."  Julian Assange, who fears extradition to the U.S. over his leak of classified data on the website WikiLeaks, sought refuge at the Ecuadorean mission in London in 2012.

At the time, Swedish prosecutors issued a European arrest warrant against him over allegations of rape and sexual assault filed by two women in Sweden in 2010.  Although Sweden has dropped its original arrest warrant for Assange, he faces arrest by British authorities for allegedly breaching bail conditions if he leaves the embassy.

All of that, he believes, is meant to ultimately hand him over to the United States, where he is wanted for the leak of the classified information.

In December 2017, five years after entering the building, he was finally made an Ecuadorian citizen.  "The Ecuadorian state has to protect Assange's rights, he is not just an asylum [seeker]; he is a citizen," said Correa, who was president when the Latin American country granted Assange asylum back in 2012.

The move would be "a shame" for Quito, Correa said.  He added that such behavior showed that the government had "absolutely submitted" to Washington without actually earning any favor.  Correa made the remarks only a week after two U.S. lawmakers wrote to Moreno, calling on him to "hand Assange over to the proper authorities."  They described Assange as "a dangerous criminal and a threat to global security," while saying they were "disturbed to learn that your government [Moreno's] restored Mr. Assange's access to the Internet."

Meanwhile, Ecuadorian Foreign Minister José Valencia said in an interview with Reuters that Quito "has no responsibility to take any further steps" to legally help Assange, who faces new restrictions at the embassy.  "We are not Mr. Assange's lawyers, nor are we representatives of the British government.  This is a matter to be resolved between Assange and Great Britain," Valencia said.  The foreign minister also said that Ecuador is not responsible for helping Assange leave the London embassy safely.

In recent days, Assange's lawyer said that the WikiLeaks founder was suing Ecuador's foreign minister for "isolating and muzzling" him with new rules, require him to avoid making online political comments.  "He has been held in inhuman conditions for more than six years," said attorney Baltasar Garzon, who is in Ecuador to launch the case, which is expected to be heard in court next week.

According to Wikileaks, Ecuador had threatened to remove the protection Assange has had since being granted political asylum.