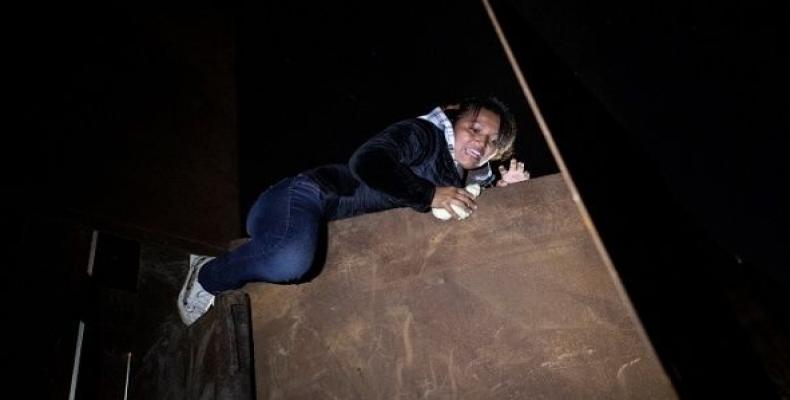 Tijuana, December 4 (RHC)-- Several members of the Central American Exodus caravan tried a different way of gaining asylum in the United States, making their way across the border fence in Tijuana, Mexico late Monday night.  Some immediately turned themselves over to U.S. Border Patrol agents while others squeezed through less fortified parts of the fence close to the Pacific Ocean and chose to run north where they would have a stronger wall and additional agents awaiting them.

Five waves of the Migrant Exodus, or caravans, left out of Honduras, Guatemala and El Salvador beginning October 12th, walking and hitchhiking to Tijuana, Mexico, on the U.S. border, in just over a month.  Thousands of Central Americans, including many parents with children, were accused by U.S. President Donald Trump of being ‘criminal invaders’ as they made the dangerous journey to escape overwhelming poverty, violence and climate change within their home countries.

Most of the migrants arrived in Tijuana by mid-November and were met with a militarized border, and U.S. security forces firing rubber bullets and throwing tear gas in some instances.

Trump had tried to force asylum-seekers to enter only at limited ports of entry or to wait in Mexico while their cases are being heard, but both tactics were thrown out by U.S. courts.  Immigration authorities have chosen to restrict asylum applications through Tijuana to between 40 and 100 per day.  Over 2,000 refugees are waiting for their turn in a government-run shelter in a dangerous part of Tijuana over 20km from the border, which was relocated after the first shelter was flooded.

Frustrated and exhausted after weeks of uncertainty and inhumane conditions, many are deciding to take their chances and traverse the border.  A number of the migrants ran to escape capture, but most of them walked slowly to where U.S. Border Patrol officials were waiting under floodlights to hand themselves in.

Applying for asylum at a U.S. land border can take months, so if migrants enter and present themselves to authorities their case could be heard quicker.

In Tijuana, authorities arrested some 236 Central Americans, mainly from Honduras for consuming illegal substances in public spaces and “disturbing public order,” says local media.  Some 200 were detained and at least half were deported by Mexican agents last week.