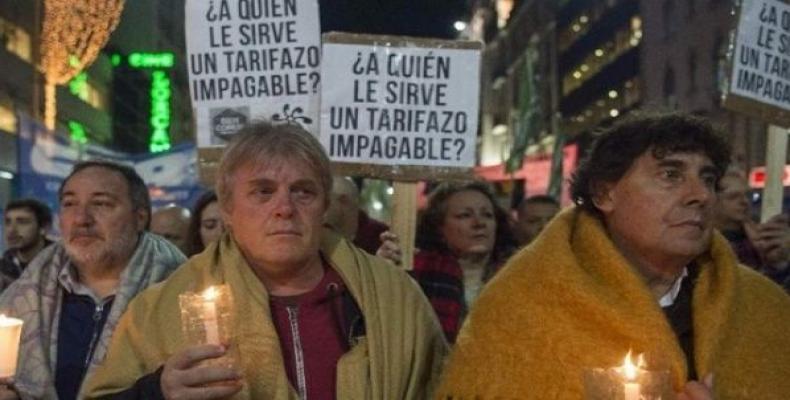 Argentina's Confederation of Workers (CTA) describes the "Torches March"' as a night protest in which the truckers' union and 62 other social organizations took part.  Demonstrators marched through the streets of the Argentinean capital shouting slogans including "No to Rates Imposed by the Rich" and "Huge Hike (Tarifazo) = Hunger."

The CTA also announced new weekly demonstrations in Buenos Aires and other Argentinean cities.  "The first measure taken by the Macri administration in 2019 was to increase rates after a very bad year," stated national coordinator Daniel Menendez.

Just before year's end, on December 26, 2018, the Argentinean government announced an increase of 40% in public transport fares, which is to be applied this month to bus, train and metro trips.  In addition, a 55% increase in electricity prices is to be implemented in Buenos Aires and a 35% hike in the rest of the country's districts.

The austerity measures seek to reduce the government's deficit through the elimination of subsidies for basic services, a policy that President Macri is required to fulfill under the terms of an International Monetary Fund bailout package worth $57 billion U$D.

Thousands of Argentineans without any reported political affiliations also joined the march in order to express their dissatisfaction with the condition being faced in their country.

"We are buying food in installments, paying interest to eat, this is illogical, this did not happen three years ago because our salaries allowed us to easily feed our children, buy them clothes or take them to school," said Ezequiel Miguel, a parent of two young children.

According to the latest available official statistics from the first eleven months of 2018, consumer prices in Argentina accumulated an increase of 43.9%, the highest since 1991.