Thousands of Argentineans march in protest over IMF deal 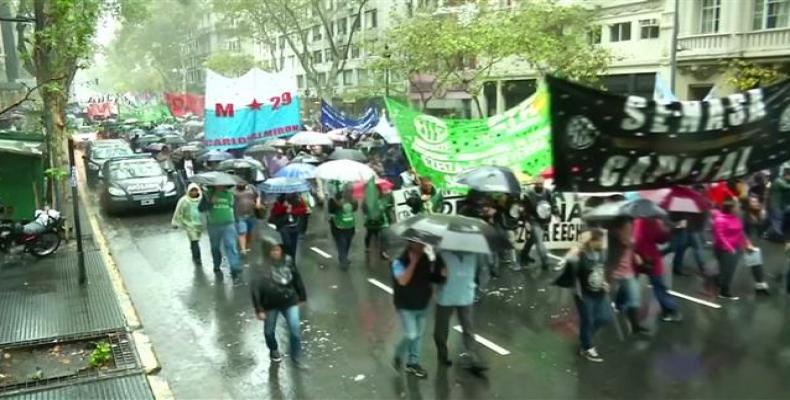 Buenos Aires, May 11 (RHC)-- Thousands of Argentineans marched in Buenos Aires on Thursday against the economic policies of the administration of Mauricio Macri and an announced deal with the IMF, the International Monetary Fund.  Organizers of the protest said that the government will undoubtedly worsen the economic situation in the country and put in danger Argentina's peso currency.

Under a driving rain, protesters from progressive organizations and unions carried banners and waved flags.  Secretary-General of the Association of State Workers, Hugo Godoy, sounded defiant as he spoke out against the government policies.  He said: "To the workers: they will not stop us, nor the storm and because we workers are not going to to permit this Congress to accept the interference of the International Monetary Fund, the increase of tariffs or the labor reform.  We are going to fight until the end so that those infamous resolutions of the government of Macri are turned back.  The workers have a memory.  We know that policies like these led us to hell and we will not allow it."
Macri and IMF Managing Director Christine Lagarde announced on Tuesday they were opening talks for a financing deal after Argentina's peso currency touched a new low of 23.5 to the dollar, despite tighter fiscal measures and hiking interest rates up to 40 percent in Latin America's third-largest economy.

On Wednesday, the Treasury Ministry announced it would seek a "stand-by deal" from the IMF, a type of financing that would likely require more conditions and orthodox policy reforms than a Flexible Credit Line (FCL), such as the more so-called stable economies of Mexico and Colombia have.

For many, the announcement brought back memories of a 2001-2002 financial crisis that many blamed on IMF policy prescriptions adopted by the government.  The crisis was punctuated by a debt default and currency devaluation that tossed millions of middle-class Argentineans into poverty.