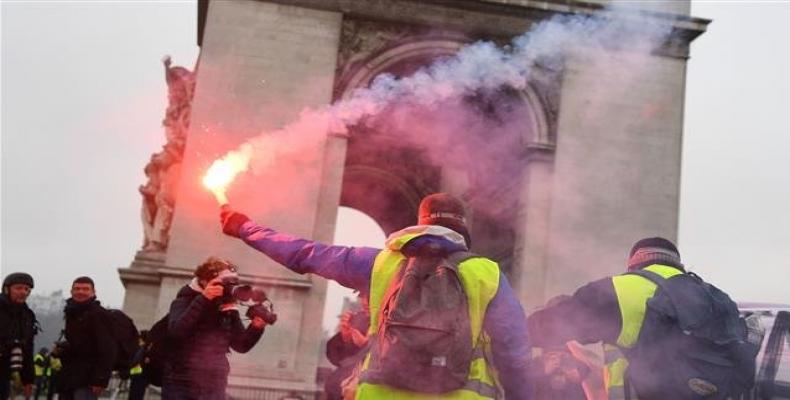 Paris, January 16 (RHC)-- French President Emmanuel Macron is trying to convince skeptical French citizens of his latest move to quell "yellow vest" anger as he kick-started a two-month national debate on his policies, yet still excluding most of the protesters' demands.

"We won't agree on everything, that's normal, that's democracy. But at least we'll show we are a people who are not afraid to talk, exchange and debate," he wrote in his "letter to the French", which was often compared on social media to the letter King Louis XVI wrote when he convoked a national debate with the "Third State" (the working class).

"The time came for debating together about how we will do things the way I planned," tweeted Guillaume Meurice, a French humorist with a daily show on the public radio France Inter.

In French history, Louis XVI then refused to take into account the demands for more social, economic and political rights, saying: "I am the only judge of what should be debated," and was eventually beheaded along with his wife and children.

The missive followed another nationwide "yellow vest" rally last weekend which saw an impressive turnout despite being the ninth consecutive protest since late November, and the violence of police repression that many claim has worked as a deterrent factor for protesters.

At least 1,700 protesters have been reported injured in total, and a dozen people have died in relation with the protests.  However, no policeman has been suspended yet, and Macron announced a pay rise for the national police in December.

In the ranks of the "yellow vests," many called Macron's public letter a government smoke-screen.  "A debate means discussing everything.  When you say we're going to debate, but not about that, that, that and that... that's called 'shut up and listen to me'," Maxime Nicolle, one of the movement's most prominent figures, said in a YouTube video.

The leftwing Liberation daily said the debate was an attempt by Macron "to save the three years he has left" as president, but warned that national mood is "extremely grumpy."

In an Odoxa-Dentsu poll published last week, 32 percent of respondents said they would take part in the debate but 70 percent said they did not believe it would lead to significant change.

The task of organizing the public forums has fallen to local government minister Sebastien Lecornu and junior environment minister Emmanuelle Wargon, government sources told AFP. But it remains unclear who will host and coordinate the discussions at the local level.

Three association of French mayors and local officials said in a statement Monday that they could act as "facilitators" but not organizers.

The questions to be debated include: "Which taxes do you think should be lowered first?"  "Should some public services that are out of date or too expensive be eliminated?" and "Should we use more referendums?"

Macron said he would not revisit steps taken "to encourage investment and make work pay more" — seen as a slap-down of the "yellow vest" demand to reinstate the fortune tax on high earners he partly repealed last year.

"The fact he said we are going to get rid of public services is not a good sign for those who need those services," said the mayors' representatives in an earlier meeting with Macron.

"The issue of purchase power comes up very often (with citizens), another one added.  "The matter of social and fiscal injustice.  Many people consider that they must permanently pay taxes when others can easily dodge their duties, how do we say that, tax evasion — in a recurring way."

The leftist France Unbowed party, which has been vocal in support of the "yellow vests," accused 41-year-old Macron of pre-determining the outcome of the talks.  "The people may debate, but Jupiter decides," tweeted France Unbowed MP Eric Coquerel, referring to Macron mockingly by his nickname, the king of the gods in Roman times.

The debate is the third prong of Macron's strategy for ending the "yellow vest" protests, which erupted in November over high fuel taxes before morphing into a widely supported revolt over inequality.

The government has also vowed to crack down on troublemakers within the "yellow vest" movement following repeat scenes of rioting and arson.  But the revolt has shown no signs of dying down, with an estimated 84,000 people taking part in last Saturday's protests.