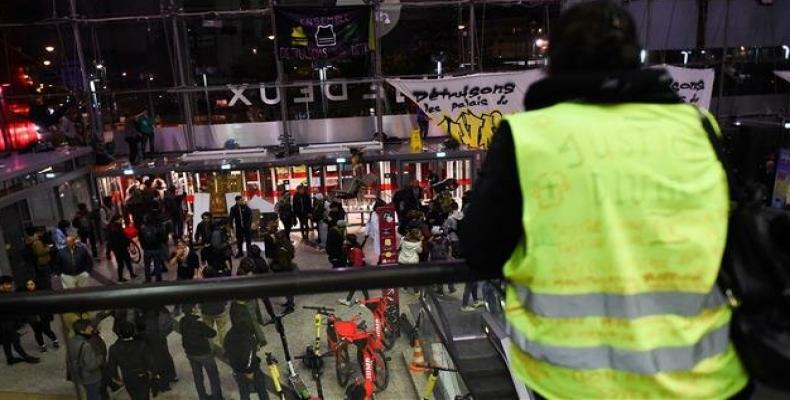 Paris, October 6 (RHC)-- For the 47th consecutive weekend, Yellow Vests marched across France and many were savoring their historic victory from last week.  President Emmanuel Macron was forced to abandon a 10th consecutive year of budget austerity out of fear that it would provoke even bigger Yellow Vest protests but the Yellow Vests achieved what 9 years of protests and marches led by unions, NGOs and other grassroots groups could not.  They also accomplished what the 2012 election of Francois Hollande was supposed to achieve, before he infamously backtracked on ending austerity.

However, austerity is not completely finished.  Macron is moving forward with a far-right reform to the pension system, which is provoking nationwide strikes and protests almost every day.
A primary characteristic of the Yellow Vests, and likely a reason for the success and popularity, has been their refusal to work with mainstream political actors such as unions.

However, given the massive unpopularity and broad reach of Macron’s call for a universal pension system, many believe that the Yellow Vests should begin cooperating with other social movements.
The numbers of marching Yellow Vests plummeted in April, when Macron authorized unprecedented police aggression, bans on protests, mass arrests and fines on protesters.

However, recent polls show Yellow Vests are still supported by half the country, despite all the repression and a near-blackout of news coverage for several months.