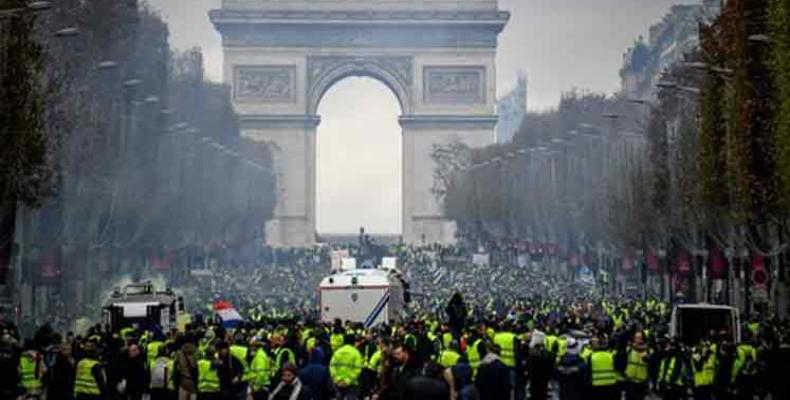 Paris, January 28 (RHC)-- The French Yellow Vests held their 11th consecutive weekly mobilization on Saturday, although internal disagreements about strategies have emerged, mostly related to the participation in both the great national debate and the European Parliament elections.

In spite of the internal disputes, the Yellow Vests movement is determined to continue taking to the streets to protest against President Emmanuel Macron administration's austerity measures.

The movement, which is named after the high-visibility jackets worn by the protesters, started on November 17th last year, as a set of decentralized demonstrations against the rising cost of living in France.

As on previous occasions, several demonstrations took place in Paris, including a march from the Champs Elysees to the Place de la Bastille, through the National Assembly and the Ministry of Economy and Finance.

At the Place de la Bastille square Saturday evening, demonstrators threw projectiles and Molotov cocktails at riot police, who in turn used tear gas and water cannons against the protesters.

According to the French Interior Ministry, some 22,000 protesters took to the streets around France, with about 2,500 people demonstrating in Paris.  Police arrested 42 protesters in Paris on Saturday.