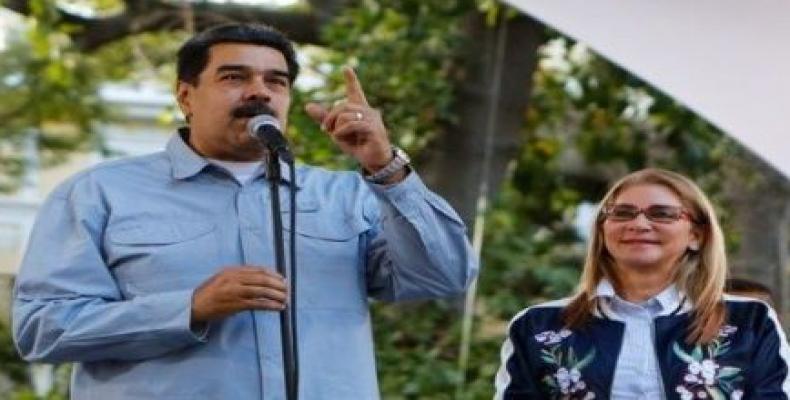 Caracas, February 9 (RHC)-- Venezuela's President Nicolas Maduro has repeated that Venezuelans are "warriors for peace" and will come out undefeated before the coup attempt promoted by the U.S. government.

"Today, Venezuela is united in one only outcry, demanding the assault seeking the suffocation of our economy and society to stop," said Maduro speaking from the Plaza Bolivar in the capital.  And he said that the people are demanding an end to the serious threats of military intervention in Venezuela.

"I have just signed the petition supporting the peace, the sacred sovereignty of Venezuela, the right to independence and self-determination of the Venezuelan people.  Empire, hands off Venezuela! Venezuela deserves respect," he added.

Maduro recalled that "Venezuela is a country that has widely expanded participatory and protagonist democracy of the people, and has become one of the countries of the world with the highest number of electoral processes in the past 20 years."

He highlighted that U.S. President Donald Trump was seeking to disturb the "initiatives of dialogue initiated by Uruguay and Mexico" in a bid to reach a peaceful solution.  "The Venezuelan people have suffered from a lot of pain the social wounds caused by a criminal commercial and financial blockade, which has been aggravated by the robbery of our financial assets in allied countries."

The United States and its right-wing allies in Latin America have come out in support of a right-wing coup attempt against the Venezuelan government of President Maduro after they supported opposition lawmaker Juan Guaido who declared himself an “interim president” of Venezuela on January 23rd in violation of the country’s constitution.

In return, Maduro has repeatedly called for the restoration of talks between his government and the opposition in order to maintain peace and avoid a U.S.-backed coup, or even military intervention by the United States in favor of removing him and placing an unelected right-wing government.