At least one Palestinian killed in Great March of Return 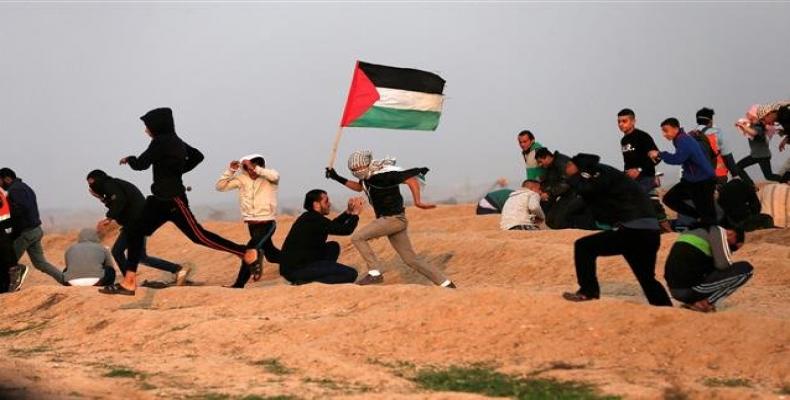 Gaza City, March 25 (RHC)-- At least one young Palestinian has been murdered by Israeli forces at the Gaza Strip, according to Hamas Health Ministry.  Early Sunday morning, 24-year-old Habeeb al-Masri died from wounds he received from an Israel Defense Force (IDF) on Saturday night as hundreds of Palestinians once again took part in the weekly Great March of the Return at the Strip demanding the removal of the blockade on Gaza, the disoccupation of Palestinian lands, and the return of Palestinian refugees.

Masri was injured after an IDF soldier shot him with a live round to the chest and was rushed to the Indonesian Hospital in Jabalia.  He was later transferred to the Shifa Medical Center in Gaza city where he died of his wounds.

At least two other Palestinians were injured with live fire and several others were treated for tear gas inhalation.

Gaza health authorities said just under 200 people have been killed since Palestinians launched weekly border protests March 30, 2018.  They are demanding the right to return to land from which their ancestors fled or were forced to flee during Israel’s founding in 1948.

Earlier this month a U.N. Human Rights Council report confirmed that Israel may be committing war crimes by using live fire against protesters in Gaza and targeting doctors and journalists at the border.