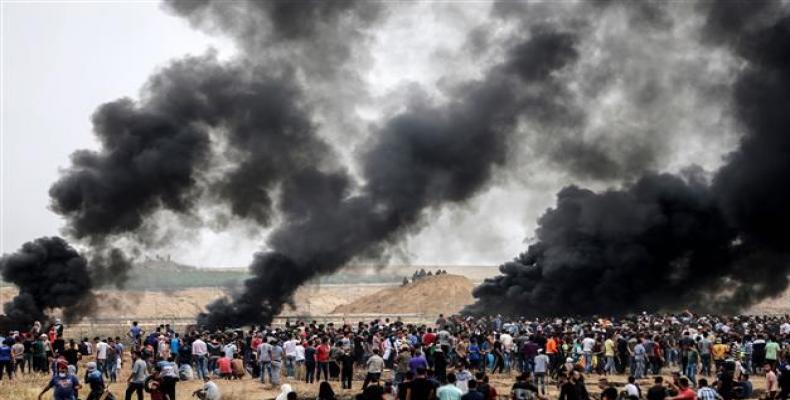 Gaza City, May 5 (RHC)-- Israeli forces have fired live rounds at Palestinians during anti-occupation protests and clashes along the border between the besieged Gaza Strip and occupied territories, injuring about 1,100 people.

Medical sources said around 82 people were shot and wounded with live fire, another 800 treated for gas inhalation and the rest for other injuries along the Gaza side of the 25-mile border fence, where Palestinians set up tent encampments on March 30 for what they call “The Great March of Return.”

Palestinian youths rolled burning tires to within 500 meters of the fence, using the smoke as a screen to counter Israeli sharpshooters on the other side.

“If it wasn’t for the occupation, we would have lived as free as people like in other countries,” said Ahmed, 24, at a protest site east of Gaza City. “If they don’t allow us back, at least they should give us a state.”

Nearly 50 Palestinians have lost their lives in clashes with Israeli forces during protests along the Gaza border since March 30.  The Israeli regime has faced international criticism over its use of live fire.

The Palestinian rally, known as the “Great March of Return,” will last until May 15th, which coincides with the 70th anniversary of Nakba Day (Day of Catastrophe), when Israel was created. Every year on May 15, Palestinians all over the world hold demonstrations to commemorate the day, which marks the anniversary of the forcible eviction of hundreds of thousands of Palestinians from their homeland by Israelis in 1948.

Since 1948, the Israeli regime has denied Palestinian refugees the right to return, despite UN resolutions and international law that uphold people’s right to return to their homelands.

Israel occupied the West Bank, East Jerusalem and parts of Syria’s Golan Heights during the Six-Day War in 1967.  It later annexed East Jerusalem in a move not recognized by the international community.

Israel is required to withdraw from all the territories seized in the war under UN Security Council Resolution 242, adopted months after the Six-Day War, in November 1967, but the Tel Aviv regime has defied that piece of international law ever since.