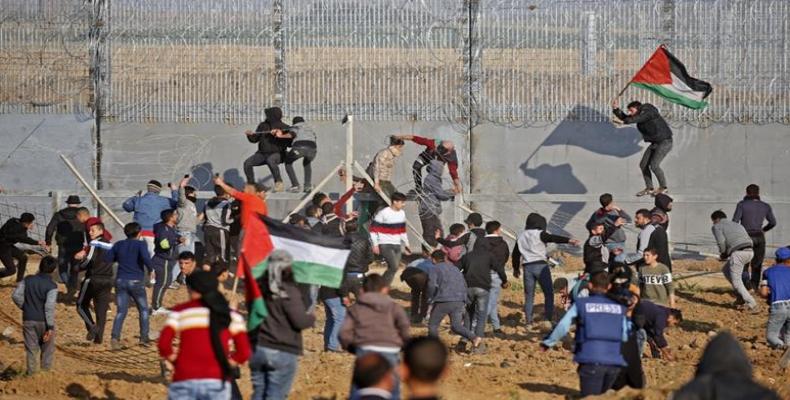 Gaza City, March 23 (RHC)-- Israeli forces opened fire on the Palestinians protesting along the fence that separates the besieged Gaza Strip and the Israeli-occupied territories, killing two and injuring 55 others.

Gaza’s Health Ministry announced the casualty toll on Friday.  According to the ministry, medical workers in eastern Gaza also suffered from the inhalation of tear gas fired by Israeli forces.  The latest Israeli killings came in defiance of a United Nations condemnation of Israel’s use of “unlawful force” against the protesters in Gaza.  Earlier on Friday, the UN’s Human Rights Council had denounced Israel’s use of “unlawful lethal and other excessive force” against unarmed Gazan protesters.

Gazans started protesting along the fence on March 30th, 2018 -- nearly one year ago -- demanding the right to return for those Palestinians driven out of their homeland by Israeli aggression and calling for a halt to Israel’s inhumane blockade of the enclave.

Israeli forces deployed to the area have used force from across the fence against the protesters, killing over 260 Palestinians and wounding at least 26,000 others, according to the latest figures released by the Gazan Health Ministry.

The clashes in Gaza reached their peak on May 14, the eve of the 70th anniversary of Nakba Day, or the Day of Catastrophe, which coincided with Washington’s relocation of its embassy from Tel Aviv to occupied Jerusalem.