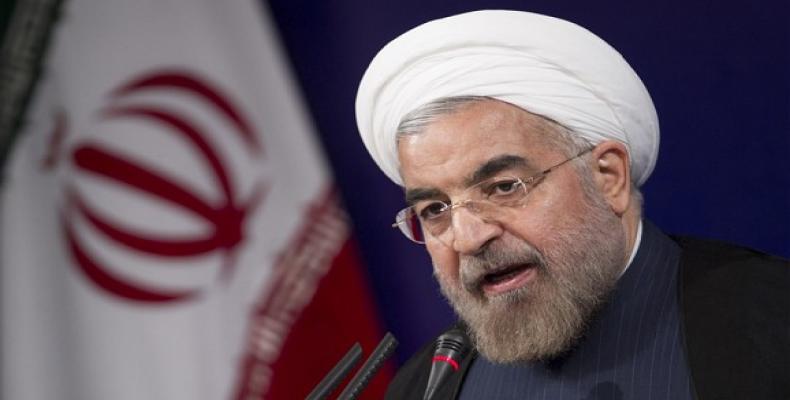 Tehran, May 22 (RHC)-- President Hassan Rouhani asserts that the Iranian nation may be under pressure, but will not “bow its head in the face of bullies.”  Rouhani made the remarks on during a trip to country’s northwestern West Azerbaijan Province, where he inaugurated eight developmental projects, including two dams.

“Holding onto premature perceptions, they had thought they would be able to shatter Iran’s grandeur,” he said, adding, however, that “we have been witnessing prosperity across this land every day in this tough time and under sanctions.”

“This is a very decisive response to the White House and to those who reckon they can make the great nation of Iran buckle under their pressures,” the president noted.  Rouhani underscored how Washington regularly walks back its threats against Iran shortly after issuing them.

“The White House announces that the people of Iran should be wary of an attack: however, [no longer than] two hours later, under pressure from the Pentagon,” the U.S. president declares that Washington was not after launching any attack against Iran.”

“This is the very power of the Iranian nation,” Rouhani stated, noting that the enemies cannot stand the country’s endeavor towards progress and self-reliance.  The U.S. remarkably stoked tensions with Iran last year by leaving a multilateral nuclear agreement with Tehran, and then restoring the sanctions that had been lifted under the deal.  The U.S. has also dispatched an aircraft carrier strike group, a bomber taskforce, and an assault ship to the Persian Gulf, citing an alleged likelihood that Iran could target the American interests in the region.

Earlier this week, U.S. President Donald Trump tweeted: “If Iran wants to fight, that will be the official end of Iran.”  Soon afterwards, though, he downplayed what he has been trumpeting as “Iran’s threat” to the region and the U.S. interests.