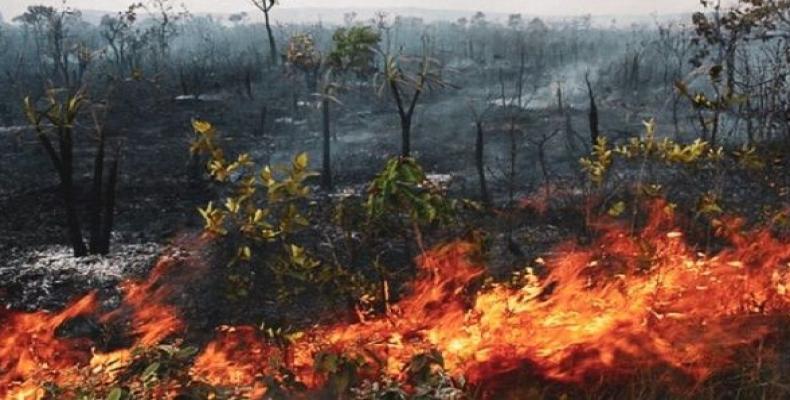 Brasilia, August 26 (RHC)-- Amid growing international outrage over the massive wildfires ravaging the Amazon, the Brazilian military has started fighting the blazes, with military planes dropping thousands of gallons of water onto the rainforest.

Brazil’s far-right President Jair Bolsonaro ordered military operations in seven states to combat the fires on Sunday, facing criticism from world leaders that his government was not doing enough to combat the fires, which are rapidly destroying the world’s largest rainforest and paving the way for a climate catastrophe.

The fires are also devastating large swaths of land in Bolivia, where President Evo Morales said Sunday he would accept international aid to fight the blazes, that have doubled in size since Thursday.

The Amazon produces 20% of the oxygen in the Earth’s atmosphere and is often referred to as the “lungs of the planet.” Protesters across Brazil and the world took to the streets over the weekend to protest Bolsonaro, who has worked to deregulate and open up the Amazon for agribusiness, logging and mining since he came into office in January. Thousands rallied in São Paulo.

Bruna Brasil said: “The Amazon is a heritage for the world’s health. It’s unacceptable, what is happening in our country today.  And today people are out on the street for the removal of a government from a place it should not be at, destroying our country, destroying our riches, killing the First Peoples of this land.”