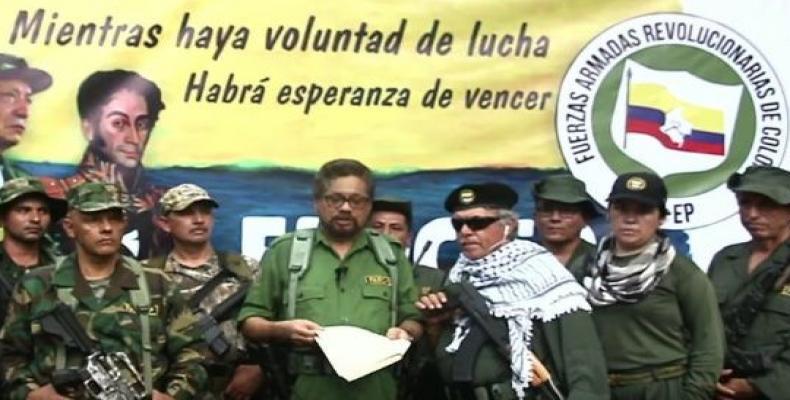 Bogota, August 29 (RHC)-- In a blow to Colombia’s peace process, a minority of senior leaders of the FARC have announced that they are splitting from the main organization and will be taking up arms again.  The FARC have officially condemned the split, defending the principles of the 2016 peace agreements.

Among those taking up arms is Jesus Santrich, a key FARC leader who has been missing since the end of June. He appeared publicly for the first time alongside Ivan Marquez, another former senior FARC leader, in a video posted to YouTube on Thursday morning, announcing a “new stage of armed struggle.”

"Betrayal, perfidy, judicial persecution, political insecurity, the murder of social leaders and ex-combatants, has forced us to take up arms.  We announce to the world that the second Marquetalia has begun under the protection of international law that assists all the peoples of the world to rise up in arms against oppression" the dissident group said in the video.

The FARC has officially condemned the move, along with all those who support peace.  In a pinned tweet on their official account, they say unequivocally “More than 90% of former guerrillas remain committed to the peace process.”

FARC lawmaker, Carlos Lozada, who is also a member of the country’s peace commission, also condemned the dissident split, saying: “A complete and definitive peace is the aspiration of the Colombian people, despite the difficulties, we will not faint along that path.  Those who oppose the Agreement are wrong; as well as those who despair and return to arms."

Another lawmaker, Iván Cepeda Castro, reacted saying: "The announcement that a group of members of the FARC has takes up arms does not mean the failure of the process or the annulment of its historical achievements. On the contrary, this new situation calls us to persevere with greater resolve in the construction of total and definitive peace."

Former President Juan Manuel Santos, who negotiated the peace accords, appealed for them to be upheld in relation to the FARC, but that dissidents should be challenged, saying “90% of the Farc is still part of the peace process.  We must continue to comply.  The defectors must be repressed with all forcefulness. The battle for peace does not stop!

The 2016 agreement has come under strain as the state and far-right paramilitaries have not complied with their end of the accords. Over 160 FARC members and at least 627 social activists have been killed in that time, whereas the FARC has fully complied with requirements to lay down arms. FARC leader Rodrigo Londoño said that it is the state which is blocking the realisation of true peace.  Londoño, along with the majority of the FARC, however, remain committed to peace, and condemn violations of the 2016 agreement on all sides.