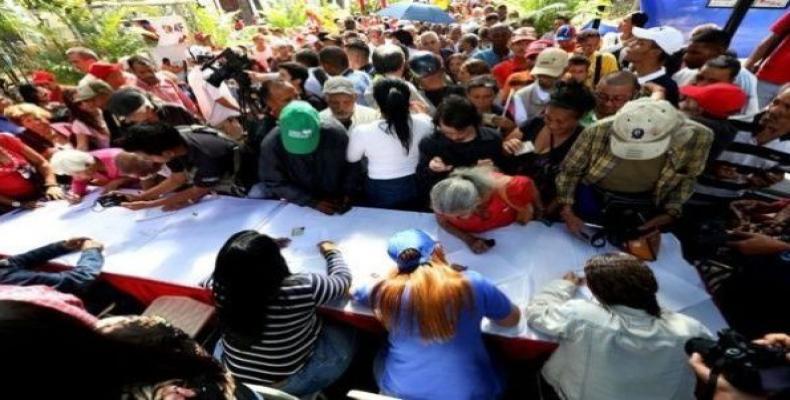 Caracas, September 2 (RHC)-- At least eight million Venezuelans added their signatures to a document rejecting the U.S. blockade, which will be presented to the United Nations, according to official reports.

Since August 10, parks and plazas across the country and makeshift stands have seen thousands of Venezuelans reiterate their repudiation of Washington's coercive measures.  The signing of the document is, along with marches and protests, part of the global 'No More Trump' campaign, promoted by the Venezuelan government to denounce to the world the damages of the sanctions imposed by the Trump administration on Venezuela.

President Nicolas Maduro emphasized that this campaign demonstrates courage, the will to fight, desire, passion and what Venezuelans feel towards Trump.  He stressed that this amount of signatures was achieved in 'record time' and recalled how in 2015 they collected almost 10 million signatures against an executive order from the U.S. in which Venezuela was considered an unusual threat to its national security.

'Enough of the blockade, enough of aggression, the people suffer, we will sign this letter that will reach the United Nations with the will of the Venezuelan people,' he insisted.  In an interview with Xinhua agency, Maduro assured that the hostile U.S policy against this nation is a failure, but denounced the damage it causes to the economy and the people's quality of life.

'They have hurt us, and so I denounce it to the world.  Great damage has been done to the quality and living standards of the people of Venezuela.  But we will continue moving forward, despite these aggressions,' he stressed during his statements to the Chinese agency.