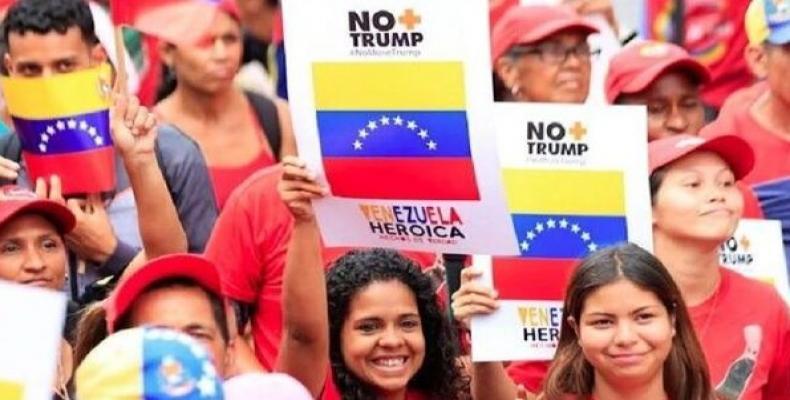 Caracas, September 16 (RHC)-- The Venezuelan government wrapped up the international #NoMoreTrump campaign Sunday as thousands gathered in plazas, communities and neighborhoods of the country to sign the petition calling on the United States to lift its unilateral blockade.

“In every corner of the planet, we have seen the #NoMoreTrump campaign because it is a feeling that has expanded to the peoples of the world.  This campaign symbolizes anti-imperialism,” Venezuela’s Vice President Delcy Rodriguez who signed the petition herself during one of the closing acts in Caracas.

Delcy Rodriguez and Foreign Affairs Minister Jorge Arreaza have been appointed by President Nicolas Maduro to represent the nation at the 74th Session of the United Nations General Assembly, which will begin on Tuesday, September 17th.  The president also reported that more than 12 million signatures had been collected from all over the world as of September 12th.

During the international meeting, the Venezuelan representatives will deliver a letter to U.N. Secretary-General Antonio Guterres with the expected 13 million signatures and explain the global rejection of the unilateral economic blockade against the Latin American nation.

“The petition is the expression of the will of a people who want peace, progress, tranquility and above all want to guarantee a free and sovereign homeland,” the Vice President commented.

The campaign was convened on August 10th by President Maduro, after Trump signed an executive order several days earlier, on August 5th, that officially seizes Venezuelan state assets in the United States, essentially imposing a complete economic and diplomatic blockade on the country.

This includes the multibillion-dollar CITGO company, a subsidiary of Venezuela’s state-owned oil company PDVSA, depleting it of $12 billion that could be used to “pay for five full years of food and medicine for the Venezuelan population," according to Arreaza.

The ongoing attack on Venezuela has taken the lives of around 40,000 people, according to a recent economic study.  It makes it difficult and often impossible for Venezuela to pay for vital supplies of food and medicine from abroad as foreign banks refuse to process payments.