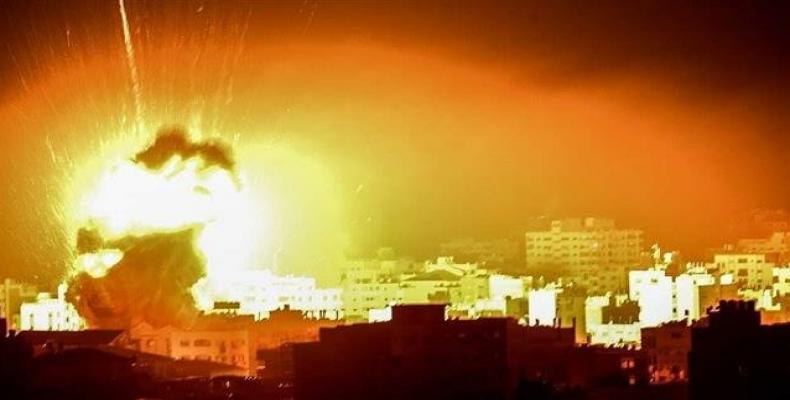 Gaza City, September 8 (RHC)-- Israel has launched a lengthy bombardment of positions in the Gaza Strip, according to sources inside the besieged enclave. Palestinian news agencies said Israeli airstrikes targeted positions allegedly held by the Palestinian resistance movement Hamas north of the Gaza and deep inside the enclave.  Health officials said there were no casualties from the attacks that lasted nearly one hour.

Israeli regime sources said the attacks hit Hamas naval facilities on the Mediterranean and two military compounds run by the group in central Gaza.   There was no confirmation from Hamas and its affiliated groups.

The relentless Israeli bombardment came after Hamas launched a drone operation targeting an Israeli military equipment stationed along the border with the occupied Palestinian territories.  It also came a day after Israelis launched attacks on five positions inside Gaza.

Regime sources have claimed the attacks were in response to Hamas operations targeting Israeli settlers and military forces.  However, attacks by Hamas have come in response to regime’s killing of people marching along the border to protest the Israeli occupation.

Two Palestinian teenagers were killed in such attacks by Israeli troops earlier on Friday in clashes that erupted east of the Gaza City.  Some 66 other Palestinians were wounded in Israeli gunfire and other attacks during the anti-occupation protest held the same day.

Hamas has launched two rounds of retaliatory attacks on Israeli positions over the past 48 hours.  The group fired five rockets into the occupied territories on Friday night, setting off sirens in Israeli settlements along the Gaza border as well as in the city of Sderot.

The group also responded to Israeli attacks by launching a successful drone operation earlier on Saturday.  The Israeli military confirmed the drone attack inflicted damage to equipment stationed along the border while claiming there were no casualties to its troops.