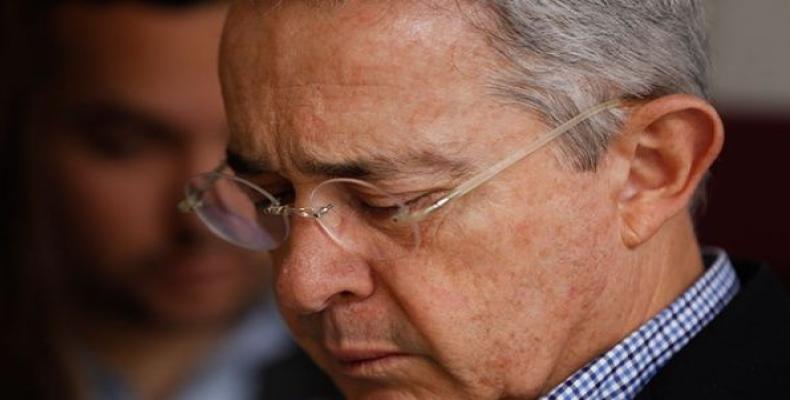 Bogota, September 27 (RHC)-- The former far-right president of Colombia Alvaro Uribe has been touring the country for the upcoming regional elections, and being greeted in every locality by huge rallies at which he is called a ‘murderer’ and told ‘no more Uribe’.  The most recent one was in Antioquia, formerly one of Uribe’s bastions.

Former President Uribe is currently on trial for charges that include involvement in a right-wing death squad called Bloque Metro.  Trial is ongoing, and in response, protesters have been attacking him as he tours the country in support of right-wing candidates at the upcoming regional elections.  In Marinilla, Uribe replied to protesters, shouting that they are echoing what Hugo Chavez used to say about him.

The trial took an unfortunate turn for the former president in early September. The Colombian newspaper El Tiempo confirmed the validity of claims made by former paramilitary ‘Victor’ that Uribe’s lawyers had paid him over half a million dollars, along with other payments, for favorable testimony.  Victor is one of only two known surviving members of the paramilitary group that Uribe stands accused of having founded.

Uribe is the figurehead of right-wing paramilitarism in Colombia.  He cooperated closely with the U.S. under ‘Plan Colombia’ to intensify the country’s civil war.  Today, he opposes the 2016 peace accords signed by the state and the FARC.  He recently called on his ally President Ivan Duque to scrap the agreement.