Protesters at Wall Street bull statue, pour fake blood and climb atop it 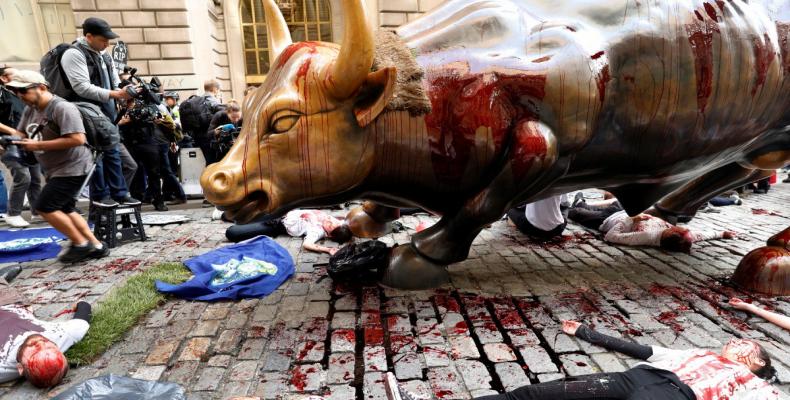 New York, October 8 (RHC)-- In New York City, a group of protesters calling for more action to stop climate change vandalized the iconic Wall Street charging bull on Monday, pouring red paint on it while climbing atop it.

The climate protesters responsible belong to an organization called Extinction Rebellion, which organized a demonstration starting at 10 a.m. ET on Monday in 60 cities worldwide, according to its website.  The protests are slated to last two weeks.

A person from the group was raising a neon green flag on top of the 11-foot-tall bronze statue, surrounded by city police officers.  Several protesters appeared to be laying on the ground around the bull with red paint on their bodies, staging a “die-in,” or simulating being dead.

The protesters were blocking tourists before the NYPD moved in and began making arrests.  A line of arrested protesters were walked out by police to shouts of “Thank you, rebels.”

The bull, a symbol of American capitalism, is a frequent target of protests.  It was vandalized two years ago by climate protesters.

Demonstrations have taken place in countries including the U.K., Germany, Spain, Austria, France and New Zealand.  Protesters in London shut down Lambeth bridge, Whitehall, the Mall and major central London roads.  Thirty people were reportedly charged with committing offences in Sydney, while more than 100 were arrested in Amsterdam.

Extinction Rebellion was established in the U.K. in May 2018 with about one hundred academics signing a call to action.