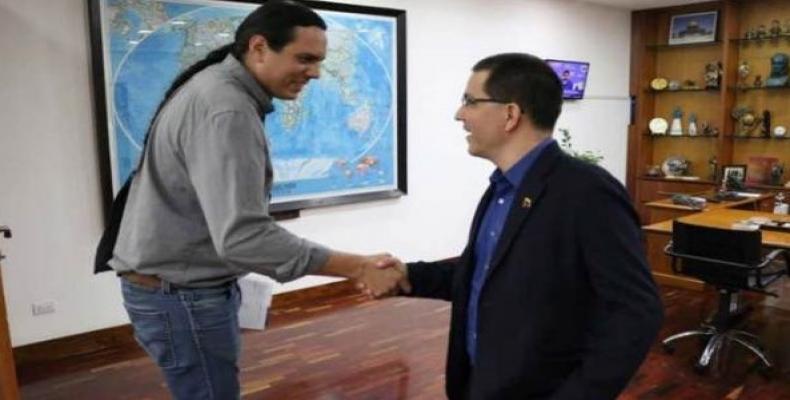 Caracas, October 30 (RHC)-- Venezuelan Foreign Minister Jorge Arreaza spoke Tuesday with indigenous representatives from the United States to strengthen ties of brotherhood in the context of the First International Meeting of Native Peoples.

Arreaza met with Professor Nick Estes and the team of The Red Nation, an American organization dedicated to promoting the liberation of the natives from capitalism and colonialism.

Inspired by the Indo-American socialism of Jose Carlos Mariategui (1894-1930), the representatives of both nations talked about the struggles and fraternity among native peoples, the Minister of Foreign Affairs explained, through a message on Twitter.

From this Tuesday until Thursday, the First International Meeting of Indigenous Peoples will take place in the city of Guayana, Venezuelan state of Bolivar, with the participation of indigenous leaders from some 20 countries, including Chile, Bolivia, Brazil, Colombia, Ecuador, Sri Lanka, Canada and the United States.

The purpose of the meeting is to consolidate a plan of action, for which organizational strategies will be drawn up to promote dialogue, peace and respect among nations.

The initiative is part of the strategic lines of the 25th Meeting of the Sao Paulo Forum, developed in this capital between July 25th and 28th, to establish a Bolivarian alliance of indigenous peoples for sovereignty, solidarity and decolonization.