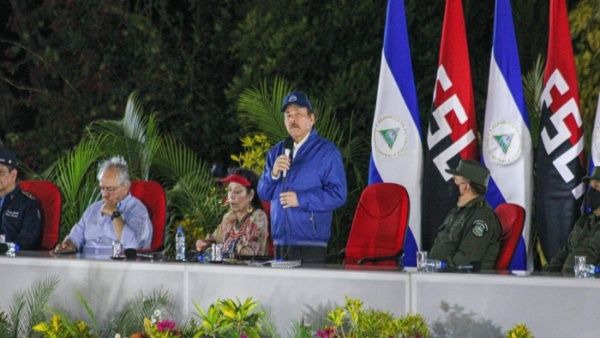 "The people of Nicaragua remain firm and will remain firm with the accompaniment and solidarity" with the peoples of Venezuela and Cuba, said the Nicaraguan president. | Photo: Barricada

Managua, February 23 (RHC)-- President Daniel Ortega paid tribute on Monday to the 87th anniversary of the assassination of General Augusto César Sandino, who led the troops that repelled the U.S. invasion of the Central American country in the 1930s.

The Central American president recalled that Sandino "signed the peace agreements" with the condition of the withdrawal of "Yankee troops from Nicaragua (...). The National Army Defender of Sovereignty knew how to confront a huge gigantic enemy."

Ortega also narrated the events in which General Augusto César Sandino was treacherously assassinated in 1934, recalling Colonel Santo López, who fought in the EDSN.  In turn, the head of state paid tribute to the founders of the Sandinista National Liberation Front, commanders Carlos Fonseca and Tomás Borges.

In his speech, Ortega condemned the dropping by the United States of the atomic bomb on the cities of Hiroshima and Nagasaki, which "were very far from the war front (...). They were not military targets.  It was simply an act of barbarism."

At the same time, the Nicaraguan president announced that, on the occasion of the historic date, he received "a letter from our brother Nicolás Maduro."  Ortega also recalled that the U.S. sanctions against the South American country have not only been denounced by the Venezuelan government but also by the United Nations Commission on Human Rights.

"The people of Nicaragua remain firm and will remain firm with accompaniment and solidarity" with the peoples of Venezuela and Cuba, Ortega pointed out, recalling that "we will not stop demanding" the end of the blockade against both nations.

At the same time, the Nicaraguan president greeted the Cuban government and recalled that President Miguel Díaz Canel was in Nicaragua during the 1980s, working "with the Nicaraguan people, in the mountains."

"This virus (referring to COVID) is eating away at the foundations of capitalism.  The foundations of oligarchic interests (...) millions of human beings" are left unemployed in the United States, Europe, Latin America and the Caribbean.  "The pandemic is causing irreversible damage," Daniel Ortega warned.

Finally, the Central American president denounced the business of the pharmaceutical companies with the vaccine against the coronavirus.  "The vaccine is in the hands of the powerful," warned the Nicaraguan president, insisting that only with the immunizer will humanity be able to get rid of COVID-19.