Nicolas Maduro calls for the consolidation of Latin American unity 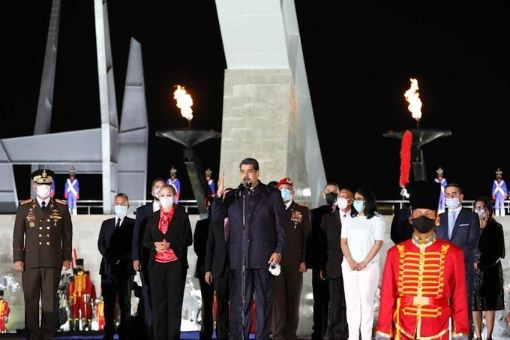 The president urged the peoples of the Americas to remain united in the face of the aggressions of the Western empires. | Photo: @PresidencialVen

Caracas, June 23 (RHC)-- Venezuelan President Nicolás Maduro, during the inauguration of a monument in honor of the Bicentennial of the Battle of Carabobo on Tuesday evening, has called for unity in the region.

"Either we are all free or no one is free.  Either there is a Latin American and Caribbean homeland for all or there is no homeland for anyone.  That was the Liberator's proclamation.  For us, the Homeland is America.  That is why we Bolivarians, when we speak of the Great Homeland, we speak of the sublime and greatest love to which we must dedicate our entire life."

The Venezuelan president affirmed that despite the attempts of division in the region, Venezuela will continue to be more united and in solidarity.   "We will continue towards 2030 free, breaking the curse of betrayal (...) We are going to open the doors to a new era of union, love, work, prosperity and growth for the homeland and the family.  An era of solidarity and love among all Venezuelans, of popular and citizen power."

In another part of his speech, the Venezuelan leader said: "Never before in 200 years we were so separated from Colombia, product of a criminal and hateful policy of the Colombian oligarchy.  How much will it cost to heal the hatred, the wounds and reunify the Patria Grande from the rebellious spirit of the peoples of Colombia and Venezuela?"

Likewise, the Bolivarian leader sent greetings to all the brother and sister peoples of Latin America and the Caribbean, since that was precisely one of the strategic concepts of the Carabobo campaign -- to unite the great South America.

"Bolivar was dividing the Spanish colonialist forces.  The liberating guerrillas did not exceed 8,000 men against 14,000 of the Spanish army.  He sought to distract and divide the forces they had in Venezuela and New Granada and caused the attraction effect to reduce their capabilities.  It was a well thought-out campaign to disperse, divide and weaken a far superior Spanish army," said President Maduro.

Nicolas Maduro recalled that Simón Bolívar achieved the great goal of the unity of the liberating Army.   "He marched throughout the territory of what is now Venezuela, thinking of victory and the great destiny of the South American homeland, a legacy that today we Latin American leaders must understand."

"Independence is not built individually.  Either there is a Latin American and Caribbean homeland for all, or there is none for anyone.  That is why the Bolivarians and the followers of Jose Marti, the Fidelistas and Chavistas, we speak of the great homeland -- la Gran Patria.

"Empires always think of geopolitical expansion, of riches, of conquests.  That is why the empires of the West came to America, enslaving native peoples.  The liberators also thought of geopolitics, two giants of the XX and XXI centuriesb -- Fidel and Chavez -- also thought of it when they founded ALBA, CELAC and PetroCaribe.

"It is necessary to consolidate the path taken in ALBA, in the innate rebelliousness of our peoples against injustice, empires, inequality and manipulation."