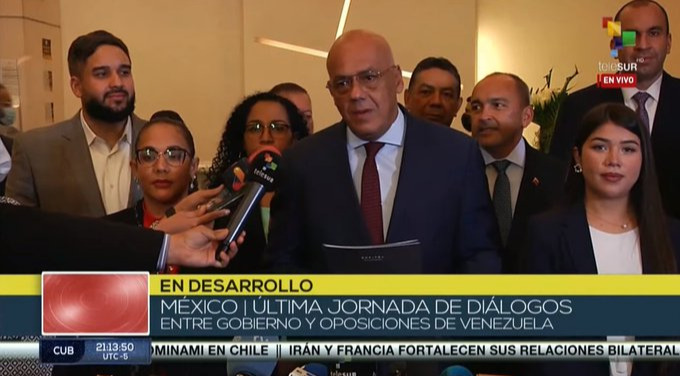 The head of the delegation of the Government presided by Nicolás Maduro expressed that there are still many issues to be discussed and both parties continue with the will to advance in the process. | Photo: teleSUR

Mexico City, September 7 (RHC)-- The head of the Venezuelan government delegation in the dialogue process in Mexico, Jorge Rodríguez, announced Monday evening that in the framework of the second day of dialogue with the oppositions, two partial agreements were signed in favor of the welfare of the citizens.

"We agreed in a profound declaration of support, respect for the history and the right that our Homeland has over the territory of Guyana, we emphasized that the 1966 Ginera Agreement is the only instrument that we recognize to settle in a friendly and bilateral manner the controversies that may arise in border matters with Guyana", he detailed.

Rodriguez explained that with respect to the protection of the economy, the recovery of monies that are in foreign accounts was subscribed as a priority.   "These resources will be used for the attention against Covid-19, acquisition of more vaccines, provision of hospitals, strengthening of food programs and attention to the Venezuelan people," he added.

"We do not need anyone to donate to us, we have enough resources that belong to the country and they are enough to consolidate the economic stabilization and attend to the population", said Rodriguez, who also serves as president of the National Assembly.

The head of the delegation for the Government presided by Nicolás Maduro expressed that there are still many issues to be discussed and both parties continue with the will to advance in the process, "we maintain the criterion that nothing is agreed until everything is agreed", he recalled.

"We thank the Government of President López Obrador and his Foreign Minister Marcelo Ebrard because they have provided all the conditions for us to advance in this dialogue process, as well as the representatives of the Kingdom of the Netherlands and the Russian Federation", said Rodríguez.

Finally, Rodriguez reported that the new cycle of meetings to advance in the dialogue will be held from the 24th to the 27th of this month in Mexico City.