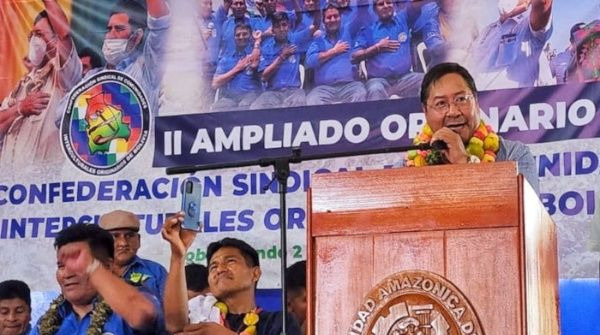 "If we maintain the unity of our social organizations the government is strong," said the Bolivian president. | Photo: @LuchoXBolivia

La Paz, July 3 (RHC)-- Bolivian President Luis Arce issued a call on Saturday to social organizations to consolidate unity in the face of the resurgence of right-wing sectors that promoted the 2019 coup d'état.

President Arce made this warning during his speech at the II Meeting of the Trade Union Confederation of Native Intercultural Communities of Bolivia (CSCIOB), which was held in the city of Cobija, in the department of Pando.

During the activity, Arce warned that the right wing that promoted the overthrow of the then president Evo Morales intends to resurface, taking advantage of some weaknesses that the ruling Movement Towards Socialism (MAS) is showing.

In the Pearl of Acre, Cobija, Pando, we inaugurated the II Meeting of the Union Confederation of Native Intercultural Communities of Bolivia CSCIOB.  Our indigenous peoples teach us that the way to defeat the right is unity.  Long live the intercultural family!  pic.twitter.com/ccXdxYQDK3

The Bolivian president called for reflection to social organizations to understand the national reality.  "Inside our country the right wing is still there alive.  The coup plotters are there reorganizing (...).  We won the elections, but we have not defeated the right-wing coup leaders and we need to know and understand that clearly.  We must not make mistakes in the next steps," he said.

In this sense, he called for the unity of all the social sectors of the country in the face of foreign interests that would try to divide and cause social destabilization in the country.