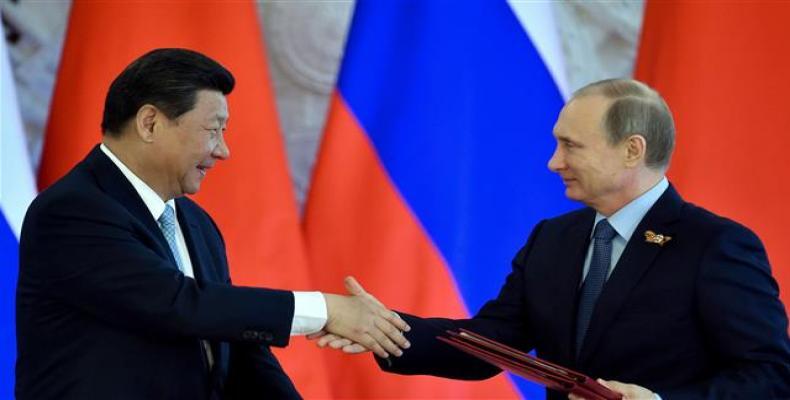 Moscow, May 9 (RHC)-- Russian President Vladimir Putin says that China's government has agreed to invest billions of dollars in the Russian economy. Putin made the remarks after a meeting with his Chinese counterpart Xi Jinping in Moscow on Friday. President Xi Jinping had arrived in Moscow for celebrations marking the 70th anniversary of the defeat of Nazi Germany in World War II.

The Russian president told reporters that China would invest about $6 billion in a high-speed railway between Moscow and Kazan, the capital and largest city of the Republic of Tatarstan. Russian Transport Minister Maxim Sokolov has said that Russia and China would invest a total of $19.7 billion in the project and that it would be completed by 2020.

Sources say Putin and Xi have signed a number of energy, trade, and finance deals, including an agreement related to China's Silk Road Economic Belt initiative. Elsewhere in his remarks, President Putin emphasized that the Silk Road initiative would boost trade and infrastructure development in Central Asia, as well as the Russia-led Eurasian Economic Union.

"The integration of the Eurasian Economic Union and Silk Road projects means reaching a new level of partnership and actually implies a common economic space on the continent," Putin said.

According to a statement by the Russian Direct Investment Fund issued earlier in the day, an agreement was also signed between the two countries that will fund creating a leasing company to sell up to 100 of Russia's medium-haul Sukhoi Superjet 100 passenger airliners over the next three years. Putin said that the company would promote the sale of the passenger planes to the Chinese and Southeast Asian markets.

According to the TASS news agency, the basic model of the Superjet, a modern fly-by-wire twin-engine jet with up to about 100 seats, would cost around $35 million, which means that the deal could be worth more than $3 billion.

According to reports, Russia and China would also develop a new heavy helicopter, called the Advanced Heavy Lift, which can lift 38 tons and operate in mountain areas.

Moscow and Beijing would also set up a $2-billion fund to promote the agriculture industries of both countries. The development also comes as Moscow is seeking to diversify its markets amid U.S.-led Western sanctions over the conflict in eastern Ukraine.