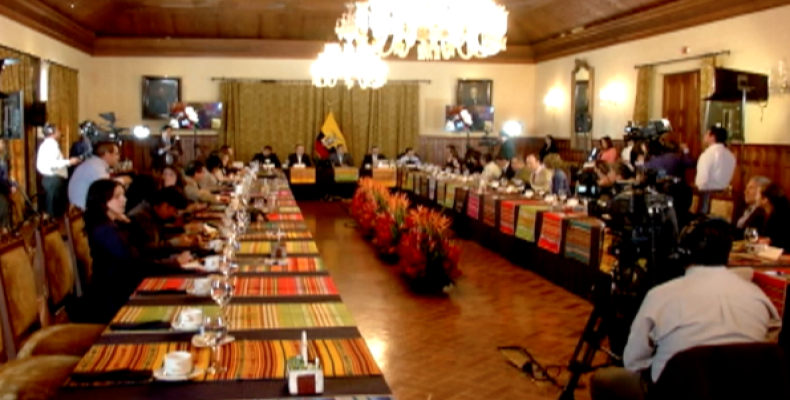 Quito, May 21 (teleSUR-RHC)-- With similar discourse and tactics across the region, President Rafael Correa says that destabilization attempts against Latin America’s progressive governments are being coordinated regionally.

Correa argued that there is a concerted effort by the regional right-wing opposition that seeks to bring about regime change. “In Brazil, Venezuela, Argentina, in Bolivia and, in Ecuador we see common criteria. And this is articulated with the same strategies, and constant contact,” President Correa told the foreign press.

“There is national and international articulation,” Naming the tactics of permanent demonstrations, the creation of incidents, and open defiance of the law, Correa said there is a pattern of actions utilized by the opposition which are seen repeatedly.

Analysts have recognized that a common demand of opposition forces is the return of free market economies and the strengthening of the private sector. “Today we see that there is a concentration of traditional powers that we call in Latin America the traditional right. Who is part of this? High level executives, industrialists, traders, bankers who have been affected by the actions taken by the governments of the new left that are of a social character,” Juan Paz y Miño, a professor at the Catholic University of Ecuador, told teleSUR English.

As part of the opposition’s strategy, President Correa said that there is psychological warfare being waged on citizens through the media, manipulating information to serve the interests of the elite, and that to combat this the region must unite through integration efforts.

Political analyst Edgar Allan Garcia told teleSUR English,“UNASUR and ALBA are playing an important role, and the fact that Celac had its first full session in Havana, Cuba was a sign for the United States to understand that it cannot continue manipulating the region.”